A side-scrolling action game in the Wagyan Land series.

Super Wagyan Land is the first Super Famicom game in the Wagyan Land series from Namco, and the third game overall. The final NES sequel Wagyan Land 3 was released a year after this game.

As with the previous games, the player controls a dinosaur named Wagyan (or Wagan) as he attempts to save his island home from Dr. Devil. Wagyan's only weapon is the sound waves he creates when he roars, which can only temporarily stun enemies rather than kill them. Likewise, boss battles aren't a physical fight to the death but rather a contest of wits, as the player must outsmart them in a game of concentration or the Japanese word game shiritori.

Super Wagyan Land took advantage of the Super Nintendo's technological advancements to graphically enrich Wagyan Land, but much of the game's content is largely cribbed from the previous two games. In a sense, Super Wagyan Land is a "best of" compilation of Wagyan Land and Wagyan Land 2, including several musical tracks and stages. It also includes a new boss mini-game, which involves trying to guess which character or object a blurry mosaic represents.

The game was also the first in the series to adopt a password system and a variable difficulty setting. Future Wagyan Land games would follow suit. 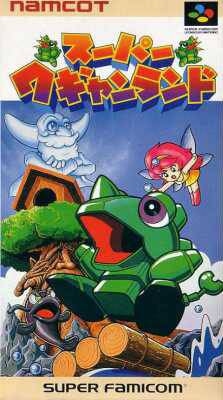