The bubble-popping Bust-A-Move series makes its way to the Xbox with a new cast of cutesy characters and a variety of new game modes. It also introduces online multiplayer to the series.

Ultra Bust-A-Move (known in Japan as Ultra Puzzle Bobble) is a tile-matching puzzle game developed by Taito and published by Majesco for the Xbox in North America on November 4, 2004, followed by a release in Japan (by Taito on January 27, 2005) and Europe (by 505 Game Street on May 19, 2006).

The seventh main entry in the Bust-A-Move series, Ultra Bust-A-Move is known for its variety of game modes, including online multiplayer (the first in the series to do so) via Xbox Live.

As standard with each entry in the Bust-A-Move series, the game includes a new assortment of cutesy characters that players can choose from. 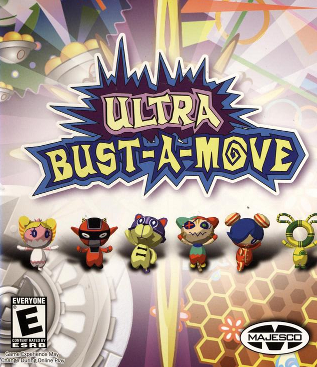