Quarrel is a strategy game based around making words. It's a mix of Scrabble and Risk. You are required to invade territories (like in Risk) except that instead of rolling die to see who takes what, you must create words (like in scrabble).

You must first choose your troops which range from ninjas to cavemen. You can then face off against your friends or the A.I. on one of the 12 maps. Each time you wish to attack or defend a territory, you must make a word out of an anagram. The number of letters that you get to make your word depends on how many troops you currently have attacking or defending (you can have up to 8 troops). The player with the longest word wins the territory and the game ends when a player has achieved world domination.

The game takes a game show like approach to world domination with an announcer calling duels between players. The game also has a variety of characters that you can play as that will each have a special ability. 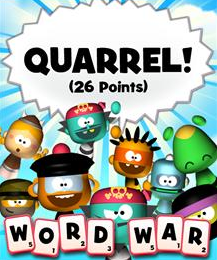