The Neo Geo sequel to the original Super Dodge Ball, notable for its minimized 3-on-3 team sizes, shorter matches, and the ability to customize teams with the captains of squads defeated. It is also the last game in Technōs's library and the first to keep the Kunio-Kun theme intact.

Super Dodge Ball, not to be confused with the original arcade game of the same name, is a dodgeball-based sports game developed by Technōs and released by SNK for arcades (running Neo Geo MVS hardware) exclusively in North America in 1996.

The last game developed by Technōs, Super Dodge Ball is a sequel to the original 1987 arcade game of the same name, itself part of the long-running Kunio-Kun series. It adds a variety of new rules and mechanics similar to fighting games, such as multiple characters to choose from, dedicated vitality bars for each character, unique motions for special moves, and powerful super moves (requiring players to charge their POW meter).

As Technōs went bankrupt during development, the game was never released in Japan (the only game in the Kunio-Kun series to not do so). Despite that, the game features Japanese translation when played on a Japanese system (under the name Kunio no Nekketsu Dodgeball Densetsu, loosely translated to "Hot-blooded Dodgeball Legend of Kunio"). It is the only Technōs game in the series outside of Japan to not receive major localization. 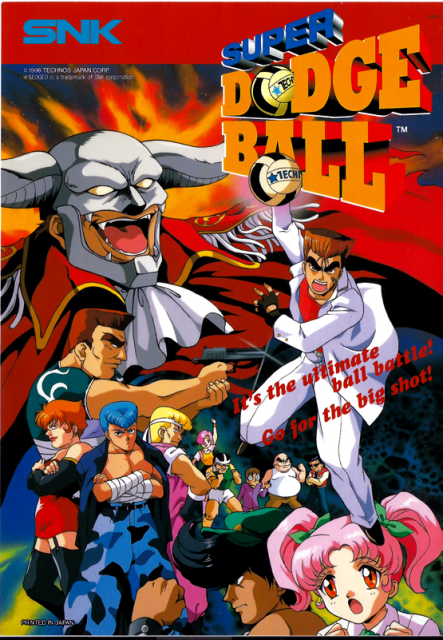