Yakuza/Ryu ga Gotoku 5 is the fifth installment in the Yakuza series and is developed by the newly formed Ryu ga Gotoku Studio. The game was first announced in a Famitsu interview with series creator Toshihiro Nagoshi in August 2011, who revealed that Sega had just green-lit production of the game. This came with his announcement of forming a new developer, Ryu ga Gotoku Studio, the team that made Binary Domain. Ryu ga Gotoku 5 is claimed to have double the production time of previous Yakuza games, and promises to provide a new experience for the series, including an entirely new game engine, a bigger and better script and atmosphere, and seamless switching between adventure mode and battle mode. It was released in Japan on December 6, 2012.

Exactly two years later on December 6 2014, Sega and Sony announced the game would be localised and was released in North America and Europe on December 8, 2015.

The developers promised a number of overhauls for the series, and the game features many gameplay improvements and additions. An example of this is in the random encounters which now transition seamlessly from the character walking around to fighting. With fighting being a standard for all playable characters, the developers made an exception for Haruka, who instead engages in 'dance battles'. Since she isn't the hostess club visiting, casino gambling type, she'll get her own hang-out places and activities, including idol events where she'll meet-and-greet fans and sign autographs. A large number of mini-games have been added, including arcade versions of Virtua Fighter 2 and Taiko: Drum Master, along with other activities like snowball fights and noodle making, as well as series classics like hostess clubs and karaoke. As a result of Kiryu's new taxi driver gig he can take part in a taxi minigame, as well as race battles, while Saejima gets to hunt bears and other animals in the snowy Hokkaido mountains.

The game's story is a continuation of Yakuza 4, this time with five playable main characters, and is roughly twice as long compared to the previous numbered entry in the franchise. Kazuma Kiryu returns once again, this time working as a taxi driver in Fukuoka (working under the pseudonym of "Suzuki Taichi"), Shun Akiyama is in Osaka on a business trip to create a new branch of his business, while Haruka moves to Osaka to pursue her new career as an idol. Taiga Saejima also returns from Yakuza 4, serving a three-year prison sentence. The fifth and final playable character is entirely new to the series: Tatsuo Shinada, a baseball player who has received a lifetime ban from the sport for cheating, although it's claimed that he is innocent. Aside from having five main characters, the game takes place across five Japanese cities: Tokyo, Osaka, Sapporo, Nagoya and Fukuoka.

A special PlayStation 3 Ryu ga Gotoku 5 Emblem Edition was also released in Japan, featuring a custom-themed limited edition PS3 console in black with golden emblems of the various yakuza families and clans from the game on either side of the PS3. The bundle also includes a half gold, half black DualShock 3 controller, a copy of the game, an 8GB USB memory stick with unspecified digital content and a beach towel. 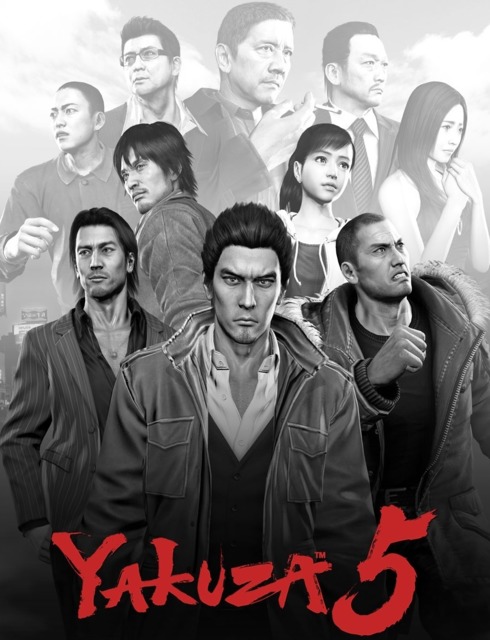