Fusion: Genesis is a sci-fi twin-stick shooter with MMORPG elements featuring 6 storylines, solo and co-op quests, more than 100 ships, and a multitude of weapon upgrades and skills. Published by Microsoft and available only on Xbox Live Arcade.
Xbox 360 Games Store

Humanity has taken its place among the stars . . . only to find itself scorned by the alien races and fighting over a startling discovery that threatens the balance of interstellar power forever. Embark on a dangerous journey through a galaxy on the brink of war, and pursue long-forgotten secrets under the shadow of an invasion from beyond known space.

Fusion: Genesis' soundtrack was composed by ex-Rare employee Steve Burke, most well-known for the critically praised Kameo: Elements of Power original soundtrack. Burke said he was attracted to Fusion: Genesis because of the amount of music he could compose. It consists of 39 tracks, lasting 1 hour 22 minutes.

You can read the full interview with Steve about the soundtrack on ScoreNotes. You can also listen to the full soundtrack and download it via the links below, courtesy of Steve Burke and Starfire Studios.

Fusion: Sentient is a Windows Phone 7 action/strategy game developed by Wahoo Studios, better known under their independent label, Ninjabee. Players command squads of robots, known as Sentients that can be upgraded and used in Fusion: Genesis. 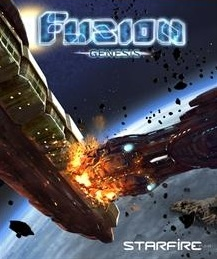