Plan and explore a way through first-person dungeons before the power runs out in this Japan-only Famicom title developed by Epoch.

Dai Meiro is a pure first-person dungeon exploring game. The player controls an archaeologist tasked with the goal of finding 9 pieces of treasure and then locating the exit before running out of hearts. Unlike most dungeon crawlers, there aren't any enemies to worry about, but instead the player loses "Pow" for every step taken. The challenge solely comes from exploring the dungeon maze in the most efficient way possible and minimizing any unintentional back tracking. There is a map available, but it only shows the area in the direct vicinity and costs two hearts to use. Throughout each dungeon there are a number of items to aid in this task.

Throughout each dungeon there are minigames that can be played to restore presious hearts on the Pow meter. These can be activated with sections of walls marked with either a heart or a cat. The heart marker starts the slot machine minigame, while the cat marker starts either the slot machine, bridge connecting, card trumping, or block rolling minigames. 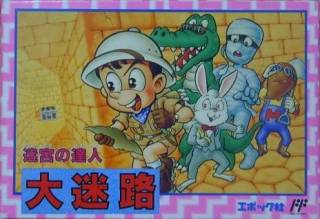