In this unique downloadable "tower offense" game, the player takes the role of God trying to prevent the Babylonians from building the Tower of Babel.
Xbox 360 Games Store PlayStation Network (PS3)

The pesky Babylonians are trying to build the Tower of Babel, which will reach all the way into heaven, and it's your job as God to prevent that from happening. Luckily you have lightning bolts, massive earthquakes, killer winds, and devastating floods in your arsenal.

The game features Kinect support (and Move Support for the PS3), along with cooperative and competitive multiplayer modes. The cooperative component allows two players to each pick two of the four elements in tandem, to fight off an unlimited amount of Babylonians. Competitive multiplayer tasks each player with fighting off Babylonians either for a set amount of time, or unlimited play. Players can send more enemies to the other player with large combos.

Gameplay in Babel Rising for mobile devices comprises of gestures and touch-based interactions. The gameplay is similar on consoles instead using buttons on a controller to use powers. As God you must prevent Babylonians from building their tower too high and reaching Heaven. The player can activate several different types of interactions and disasters to prevent Babylonians from building their tower.

Babel Rising
The Tower of Druaga 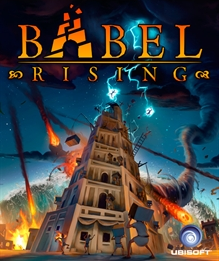