The followup to Actress Again, Current Code is the 4th installment in the Melty Blood series of fighting games.

Melty Blood: Acress Again: Current Code is the fourth installment in the Melty Blood series, a spin off to Tsukihime, and is available on Windows PCs. It contains many unique features, such as the different fighting styles called Moons. These styles determine a character's play style and movelist. Characters can build meter in order to activate Heat or perform EX moves. Heat allows characters to recover some health over time, this only applies to red health since damage dealt can be either permanent or recoverable. Once the circuit meter reaches 300%, Crescent and Full Moon characters enter Max mode which allows them to perform Arc Drive moves. By pressing A+B+C during Max mode, characters can enter Blood Heat which allows them to perform Last Arc moves, these are very powerful moves and are triggered by shielding against an attack. There are 36 different skins for each character

Like Crescent Moon Style, characters can reverse beat and dodge attacks while in the air or on the ground. They can only use EX shield. The circuit meter goes up to 200% but there's no way to activate Heat manually, once the circuit meter reaches 200%, heat will trigger automatically. During Heat, life slowly regenerates and circuit spark triggers automatically if hit.

Akiha is the younger sister of Shiki Tohno, she is one of the five heroines of Tsukihime.

Akiha Tohno, overcome by the Inversion Impulse caused by her demonic heritage.

Aoko is one of only five remaining sorceresses in the world. Also known as "Miss Blue" she is capable of controlling Blue Magic. She gave a pair of glasses to Shiki Tohno to prevent him from seeing the lines of death.

Arcueid is the White Princess of Shinso and one of the five heroines of Tsukihime, she is considered the main heroine.

Ciel is one of the five heroines of Tsukihime. She is a skilled assassin and member of a secret organisation in the Catholic Church called the Burial Agency.

Hisui is one of the five heroines of Tsukihime. She is the twin sister of Kohaku, and a maid in the Tohno Mansion. She is a terrible cook, but is very good at cleaning. She and Kohaku are the opposites of each other. Hisui's storyline takes place after the events of the main storyline.

Kohaku is one of the five heroines of Tsukihime. She is the twin sister of Hisui and a maid in the Tono Mansion. She always has a cheerful disposition and is very gifted with medicine. She was the target of the Tatari curse and gained vast scientific knowledge resulting in her creation of Mech Hisui.

Under the orders of Tohno Makihisa, Kouma eliminated the Nanaya clan. Demon blood runs strongly through his clan.

Len entered a contract with Shiki Tohno in order to become his familiar. She is a Succubus Demon with the ability to manipulate dreams. She is capable of transforming into a cat. She rarely speaks, she thoroughly enjoys cakes and hates taking baths. After her Magus' death, Arcueid took care of Len. Since then she is only awakened at the same time Arcueid hunts vampires.

Arima is a cousin of Shiki and Akiha Tohno. She has the ability to gain amazing strength due to the effects of the Night of Wallachia and uses a form of Chinese Kenpo. She is very shy, especially around her cousin Shiki. Miyako's storyline takes place after the events of the main storyline.

Neco-Arc is a feline version of Arcueid Brunestud, she is the mascot of Type-Moon and a joke character in Melty-Blood, similarly to Dan Hibiki in the Street Fighter franchise. She is the shortest character in the game, almost half the size of any other character. She can summon Kinoko Nasu to a fight as her Last Arc. Neco-Arc's storyline takes place after the events of the main storyline.

Nrvnqsr (pronounced Nero) Chaos is one of the Twenty Seven Dead Apostle Ancestors. His body is comprised of the lives of 666 creatures which he can summon to help him during battle.

Riesbyfe is the leader of the Kinght's Heresy Persecution Group and a vampire hunter. She uses a Conceptual Weapon which imitates the appearance of a stringed instrument.

Roa is the main antagonist of Tsukihime. He is a member of the Twenty Seven Dead Apostle Ancestors and is a vampire. He is able to reincarnate himself after his currently form is destroyed, allowing him to live forever.

Satsuki was turned into a Dead Apostle and killed by Shiki Tohno. She was later resurrected by the Night of Wallachia.

Shiki is Akiha's older brother and the main protagonist of Tsukihime. Being a demon hunter, he developed the Mystic Eyes of Death Perception. His glasses, given to him by Aoko, block out the lines of death.

Sion is the main female Protagonist of Melty Blood. She is an alchemist and was turned into a vampire by the Night of Wallachia.

Warakia, also known as the Night of Wallachia, is one of the Twenty Seven Dead Apostle Ancestors. He is a disembodied Tatari and can transform himself into the fears of a community. He was originally an alchemist from Atlas.

After several delays due to netcode issues, the demo for the PC version of Melty Blood: Actress Again: Current Code was released by Soft Circle French-Bread on December 12th, 2011. The demo included 4 playable characters, Sion, V. Sion, Arcueid Brunestud and Red Arcueid. The full version of the game was released on December 31st, 2011 and was bundled with a Blu-Ray edition of Carnival Phantasm, a collection of parodies and stories which are loosely based on Melty Blood and Tsukihime. 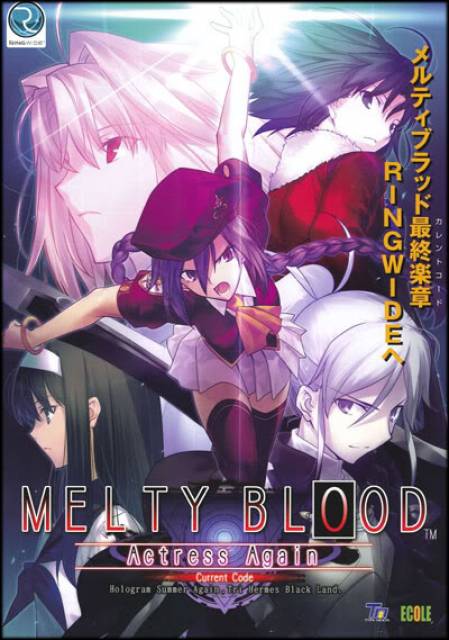