A 3D endless runner game for mobile platforms. Players swipe the screen to jump and slide, avoiding obstacles and collecting coins while seeing how far you can run.

In Temple Run, the player controls controls a tomb raider fleeing from beasts whilst jumping and sliding to avoid obstacles such as logs, gaps, fire barriers and more.

Coins can be collected in game or purchased in-app and then can be used to buy power-up upgrades, single use utilities, new characters and wallpapers from the store.

All but one of the power-ups can be collected during the game. They can all be unlocked and then upgraded in the store. Unlocking each costs 500 coins, then the cost of upgrading increases from 1000, 2500, 5000 to 7500 coins. Once a power-up has been fully upgraded you can spend 25000 coins to access the ability to turn it off completely. This has the net affect of making the remaining power-ups appear more often.

There is a known glitch where swiping twice in quick succession to turn the first corner in the tutorial results in the tomb raider performing a 180 degree turn. The game generates an infinite straight path until the player touches the screen once more. 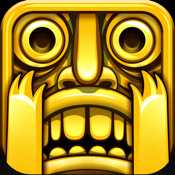