JESUS is a Japanese adventure game set in the year 2061 about an international group of astronauts aboard two spaceships, named the "Corona" and “Nebula", who depart from the JESUS space station on a mission to collect gas samples from the tail of Halley’s Comet. However, after collecting the samples, Corona's crew looses contact with the astronauts aboard the Nebula and it is up to Musou Hayao to investigate what happened. The game is most famous among western fans simply for its eye-catching title but it is also notable for being an early example of a Japanese adventure game with a command-based menu system, instead of a text parser, and for featuring a soundtrack by the composer of the Dragon Quest series, Koichi Sugiyama.

JESUS was developed by Enix and was originally released for the NEC PC-88 on April 28, 1987 with ports later being released on a number of Japanese computers and the games later being remade in 1989 by Chunsoft and King Records for the Famicom under the name JESUS: Kyoufu no Bio Monster.

A sequel to JESUS was released in 1991 called JESUS II which takes place four years after the original title but stars a different protagonist. 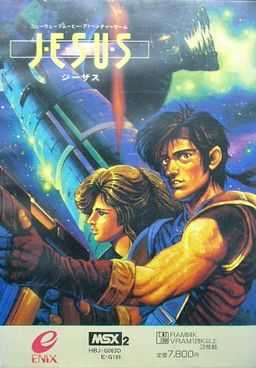