Digimon world is a game that allows a player to raise their own Digimon and teach it to battle.

Digimon World is a PlayStation game developed by Flying Tiger Development based on the popular Digimon virtual pets on May 23, 2000 in the US. It has three direct sequels: Digimon World 2, Digimon World 3, Digimon World 4. This game predates the TV anime series in Japan, before many of the digivolutions, aspects, and tropes of the Digimon cartoon were established as canon.

Digimon have various needs that have to be taken care of including eating, sleeping, pooping, tiredness, and health. The majority of time spent raising Digimon (besides training, battling, or adventuring) involves feeding them, letting them sleep (each Digimon has certain hours in a day that it is awake), and letting them use a toilet. If the Digimon poops outside of a toliet, its Virus gauge begins to fill up. If it fills up all the way, the Digimon evolves into a Sukamon. Sometimes a Digimon can become injured from battle or become sick. These can be fixed by using an item or taking the Digimon to a clinic. Over-training the Digimon without rest can cause the Tiredness status, which lowers the Digimon's Happiness and shortens their life span. The Digimon has a Happiness and Discipline gauge as well. High Happiness causes the Digimon to live longer but become less obedient. High Discipline causes the Digimon to have a shorter life span but become more obedient. Digimon also have a Life gauge made up of three hearts. Each battle lost removes a heart, until there are no hearts left and the Digimon then fades away. Age, Weight, Happiness, and Discipline also have effects on the Digimon's ability to Digivolve.

Digimon have six parameters governing their fighting ability: HP, MP, Off[ensive], Def[ensive], Speed, and Brains. Parameter growth is achieved mostly thorough training at Green Gym in File City or training areas spread throughout File Island. Training areas outside of Green Gym increase a Digimon's parameters more but are harder to get to and only have a few training stations. Parameter growth also results from winning battles against other Digimon or preforming certain tasks like carrying dirt out of Drill Tunnel for Drimogemon, although these do not increase parameters as fast as actual training. Activating a training station will cause the player's Digimon to train for one hour of game time although this can be skipped by pressing "triangle". Depending on a Digimon's speciality, some parameters are boosted more than others. The effect of training can be increased by feeding the Digimon certain items or upgrading Green Gym by carrying out certain tasks in Beetle Land.

Every Digimon starts out as a Baby form. In 6 hours game time, it evolves into the "In-training form." Every baby digivolves into its own unique In-training Digimon.

The next digivolution phase is the champion phase, and happens 3 days after Rookie phase. All Digimon evolve into Champions, however, the Digimon digivolves into depends on a few parameters: number of battles, individual stats, the number of care mistakes (letting the Digimon poop without a toilet, fainting in battle, acquiring Tiredness state), and weight of the current form. Sometimes bonus conditions trigger digivolutions and some items can induce early digivolution. In some cases, not all parameters need to be met, just be relatively close to.

The final form, the Ultimate form, is not always reached. This form can occur anytime after the 11th day of a Digimon's life span and only if very specific parameters were met. Digimon can fade away without ever reaching this stage, but Digimon at this stage are the strongest Digimon in the game and have access to the widest amount of battle attacks.

Some Mega form Digimon appear in the game as NPCs, however, the player cannot digivolve raised Digimon into this stage. Alternatively, some Digimon that exist in this game as Ultimate forms are classified in later games and in canon as Mega form (HerculesKabuterimon, for example).

Battles in this game was where the real game is. This is where the Digimon finally gets to face off against the other dangerous Digimon in the world. Depending on the Digimon's brain stat, it would have a certain number of commands the player could tell it to do. Combat is not direct control, as the player can only yell commands like attack, back off, switch target, or run away. Digimon would not always listen either. When the brain stat has reached at least 500, the player can command the Digimon to perform specific attacks. Items can be used to assist the Digimon, however, some boss encounters force the player to stick to the "Your Call" command, where the Digimon acts independently in battle, with no item assistance.

Completing specific tasks or winning some battles causes some Digimon on the island to remember who they are and rejoin File City. This also has a gameplay function: recruiting Digimon to the hub city adds services such as the Item Shop, Fast Travel, Item Bank, the Clinic, and a Tournament Arena. Recruiting Digimon also adds a rating to File City: recruiting a Rookie-level adds 1 point, Champion-level adds 2 points, and Ultimate-level adds 3 points. In-game events occur at specific point intervals and the final dungeon cannot be accessed until File City has reached a rating of at least 50.

The story of the game focuses on a young human (the player) who is brought to File City, located on File Island, home of the Digimon. He is charged with bringing all the good Digimon back to File City, for all the Digimon had inexplicably lost their memories and had become very hostile. Throughout the course of the game, the player meets many of types of Digimon and is charged with restoring order to this broken land.

As it turns out, he was not the only human who passed through to the Digital World. Where the player enters in and is friendly to Digimon, the other human who entered, dubbed Analogman, sees Digimon as tools to be exploited and that they should obey all commands. His meddling caused the Digimon to go feral and produced his Digimon, Machinedramon, the final boss of the game in Mount Infinity. Analogman reveals his true intent was to destroy the Digital World, but the protagonist stops him and from then on, is free to pass between the real and digital worlds.

After the main story is completed, the player is summoned again to the Digital World by the residents of File City, for fear of Analogman returning. A second visit to Mount Infinity reveals Analogman and Machinedramon are no longer present, but rather an egg (Digitamamon) has taken their place. Beyond this last encounter, the player is free to explore File City and recruit/raise/battle any other Digimon not acquired in the first playthrough.

The NTSC versions of this game had many prominent errors, some game-breaking. The game freezes if the player tries to access Giromon's Juke Box in File City. Trading many items to any one Mojyamon would cause the player to clip through the Mojyamon, rendering the player unable to escape from the area, unless he used an Auto-Pilot to return to File City. Many spelling errors appear in dialogue, including some that misidentify Digimon as other Digimon.

Some copies of the PAL version could not be completed because players could not enter the Ogre Fortress (an area in the middle of the game) or move from floor to floor in Mount Infinity (the game's final dungeon).

Because of the nature of the PS1 memory card, it was also possible for Digimon World game data to be corrupted. This could cause minor changes in Save Name files or, potentially worse, save files to regress to a much earlier state. 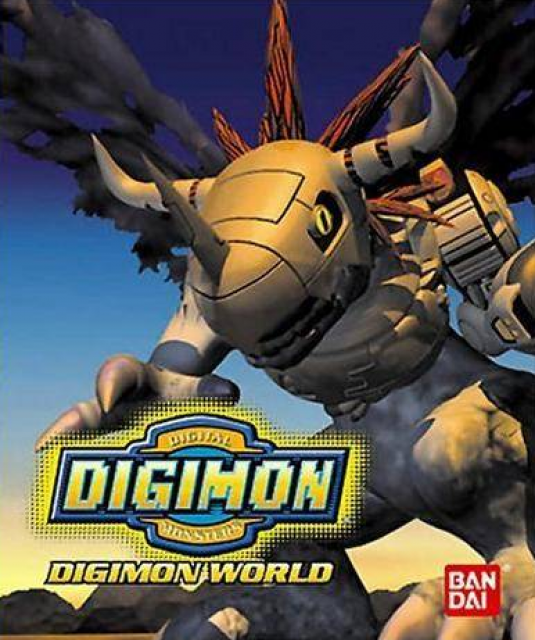