A DSiWare title that allows you to program in BASIC and share your creations.

Petit Computer is a programming tool released on DSiWare, developed by SmileBoom Co. Ltd. and published by GameBridge.

It contains a BASIC interpreter and 13 tools, including conditionals, loops, and the ability to create graphics. It's a localization of SmileBoom's Japanese release, "Petit Computer mkII", although minus the speech synthesizer found in the Japanese version. Once created, programs can be shared worldwide (including between North American and Japanese versions of the software). 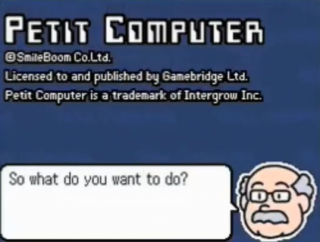