A fantasy RPG developed and published by Hudson for the PC Engine. It was never released outside Japan.

Jaseiken Necromancer was the first JRPG available for the PC Engine (Turbografx-16 in the US) and plays very much like its 8-bit contemporaries: The player selects two pre-generated characters to join them on their quest before buying equipment, talking to NPCs and getting into random encounters on the overworld map. Besides a few quirks - each of the three characters level up at different rates depending on their class and each character must successfully make their fleeing dice roll to escape, meaning it's occasionally possible to leave one hapless member fighting alone - the game is fairly standard for the time.

One notable aspect is that the game has a strong horror theme, with many of the monsters appearing rather grotesque and deformed. The box art, drawn by famed Swiss surrealist and master of the macabre H.R. Giger, is a clear example of the game's darker tone. 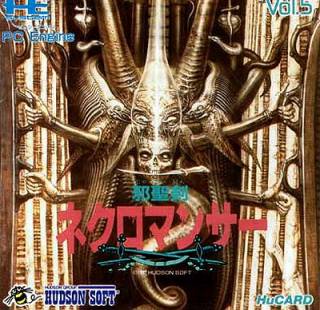