Yokai Dochuki is an Arcade game by Namco that follows the adventures of a young boy through Jigoku, the Japanese equivalent of Hell. The game was later released for the PC Engine and Family Computer, but neither version was available outside of Japan. However, an unofficial english arcade version titled "Shadow Land" exists.

Namco's first 16-bit game, Youkai Douchuuki (lit: "Spirit Travel Journal") is an arcade game that follows the adventures of a young boy named Tarosuke as he makes his way through Jigoku, the ancient Japanese equivalent of Hell. The goal is to make it to the end, defeat the boss of the underworld and be taken off to an afterlife. This afterlife would change depending on the player's actions during the last stage of the game, with progressively worse destinations dependent on the number of enemies killed and cash collected.

Youkai Dochuuki originally hit Japanese arcades in 1987. The following year, the game was ported to the Turbografx-16 and the NES. Both have slightly different layouts than the Arcade version, and the NES version has an additional counter for "piousness", which is related to the game's multiple endings. Neither of these home versions were ever translated into English. However, an unofficial English arcade version titled "Shadow Land" exists.

Tarosuke is one of many classic Namco characters that would later appear in their crossover strategy RPG Namco X Capcom.

Youkai Dochuuki is a side-scrolling 2D platformer with multiple branching paths. Each stage is full of bonuses, secrets and alternate exits and the player must be economical with their savings to purchase items that will help them progress. Though Tarosuke only has one life, he has a health bar with sixteen segments allowing for multiple enemy attacks. The player can recover some or all Tarosuke's lost health with healing items.

Tarosuke's main attack is his focused ki blasts, which can be charged up for additional damage (though the player must be wary not to let them charge up too much, as this will tire Tarosuke out and make him temporarily vulnerable to enemy attack). This ki blast can be upgraded by purchasing stronger versions in stores, which tends to increase the number of projectiles fired simultaneously.

During boss fights player control will switch to the friendly spirit Monmotaro, who fights the boss in Tarosuke's stead. Tarosuke will simply pray at a nearby shrine for success. Monmotaro also fights with ranged ki blasts, though his are able to home in on the nearest enemy. He is also able to fly around the stage to engage bosses easier. Once the boss is defeated, control switches back to Tarosuke.

There are five possible destinations that Tarosuke will be taken to depending on how the last stage was completed. They are: 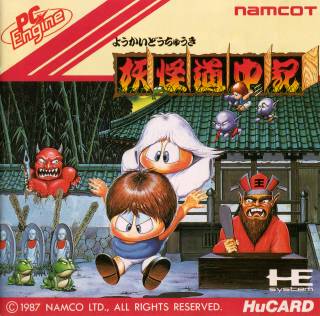