Cu-On-Pa is an original puzzle game that was developed by a little-known group called Onesong Partners. This group originally released an obscure game similar to this but with a wider audience in mind, various enhancements and alternate modes for PCs called "Endorfun" in 1995 in the U.S and Europe.

Japanese developers seemed to like the concept and got permission to make something like it based on the original principals of Endorfun for the obscure Satellaview (or BS-X) and then later as a standalone release for the Super Famicom, where the game was called BS Cu-On-Pa and Cu-On-Pa SFC, respectively. It would also get released later for PlayStation.

Published by T&E Soft for the SFC late in 1996, Cu-On-Pa was also fan-translated sometime later for the emulation community, though the game comes with a rather straightforward tutorial and the game is very easy to understand, but difficult to master. This game is difficult to describe and in a league of its own.

The player controls a three-dimensional cube that must destroy all the "Life Panels" on a level. To do so, the player must rotate the cube and roll over the colored squares on the transparent field. Panels come in a variety of colors and the main way to eliminate them is by having the color on the top of the cube match the color of the tile beneath.

The other way is for more skilled players and comes in the form of "Lightning Panels", which are generated when panels are destroyed other than Life Panels. Destroy enough of them and the player will see more of them. If the player then destroys a life panel, all lightning panels of the same color will explode as well. Moreover, the explosion spreads and detonates other tiles in the vicinity, which can spread and create a chain reaction. The player is given a choice in how to rack up points, either by time bonuses, lightning chains, or both.

Ken Kojima was the music composer. 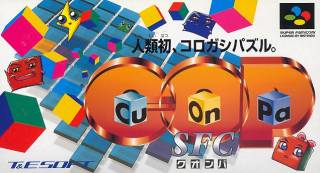