Legacy of the Wizard

An early example of a "Metroidvania"-style platformer, Legacy of the Wizard tells the tale of a family of adventurers who must use their combined abilities to seek the Dragon Slayer sword and defeat a powerful dragon deep in a twisting labyrinth.

Legacy of the Wizard (known in Japan as Dragon Slayer IV: Drasle Family) is a medieval-fantasy action-adventure platformer developed by Nihon Falcom for the MSX in Japan (on July 9, 1987) and Famicom in Japan (published by Namcot on July 17, 1987). The Famicom version was later localized for the Nintendo Entertainment System in North America by Brøderbund on April 1989.

The fourth game in the Dragon Slayer series (and the first released outside of Japan), Legacy of the Wizard follows the story of a family of adventurers (the Worzen family) who must use their combined abilities to find the legendary Dragon Slayer sword and destroy the evil king dragon Keela deep in a vast underground dungeon.

The game is an early example of a non-linear platformer with action-RPG elements (later known as "Metroidvania"). As some items and pathways can only be used by certain characters, players will have to collect items and backtrack to the beginning to change between characters and save or restore passwords.

Roas is the heroic son of the family and the one destined to wield the Dragon Slayer. Although Roas has no unique abilities and cannot collect any of the Crowns himself, he is the only character who can collect and use the Dragon Slayer to defeat the final boss.

Xemn is the father of the family and a very strong warrior. Along with his powerful offensive ability, he is the only character that can equip the magic gloves (allowing him to move some blocks inside the dungeon).

Lyll is the daughter of the family and a very agile character who can have the highest jump in the game. She is the only character that can equip the magic pickaxe (allowing her to break certain blocks).

Pochi is the pet of the family and a dog who can transform into a cute monster. Despite its low attack range and weak jumping ability, it can bypass other monsters and obstacles simply by walking through them. 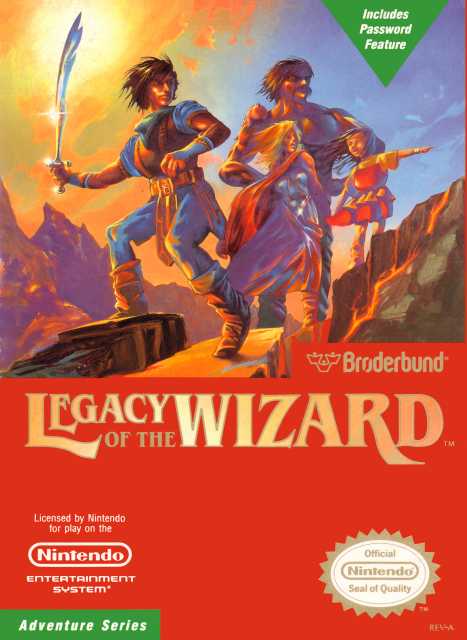