The second NES Ninja Jajamaru game in a series of ninja-themed platformers from Jaleco.

Instead of the shorter levels of its antecedents, Jajamaru no Daibouken takes a cue from Super Mario Bros. and has long, side-scrolling stages through various environments, defeating enemies and collecting power-ups along the way. At the end of every level, the player has a chance to score bonus points by defeating a boss character, and at the end of every tenth level defeats his nemesis and rescues the princess. The game continues with even more challenging stages each time Jajamaru's nemesis is defeated. 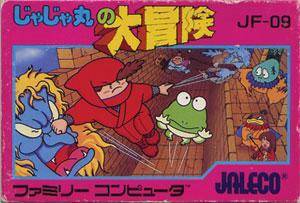