Total Overdose is an arguably racist action game that mixes gameplay elements of GTA and Max Payne in a Mexican-style cocktail.
PlayStation 2

Total Overdose is a third-person action shooter by Danish developers Deadline Games, and was released in September 2005. The game stars a man by the name of Ramiro Cruz, the son of a famous agent for the Mexican government who got shot and killed on one of his mission. The story follows Ramiro as he tries to discover who killed his father and why. The game takes place in an open world similar to that of the GTA series. What makes Total Overdose unique is the inclusion of a set of stylish shooting mechanics, which mix the bullet time ability of the Max Payne series with a set of acrobatic moves, such as doing a 180-degree flip off a wall. The game also features a robust combo system, with named 'trick' moves, akin to the Tony Hawk series. Kills made using the aforementioned acrobatic and time manipulation mechanics, or simply in quick succession, reward you bonus points. Accumulation of points earns the player "Loco Moves", which are a set of super attacks that are both powerful and flashy.

The player assumes control of Ramiro "Ram" Cruz: once a lowlife criminal, now a lowlife DEA agent. He has been sent in to the Mexican city Los Toros by his twin brother Timmy, who wants Ram to find out who killed their father Ernesto, who was suddenly killed during a mission. The player is tasked with infiltrating Mexico's biggest drug cartel, and will battle it out with Mexican drug dealers, luchadores, guerrilla soldiers, and many more unusual foes.

The character you will play as for most of the game. Ram does not believe in doing things "by the book," and as such he creates an incredible amount of destruction everywhere he goes. During the course of the game, Ram's enemies will refer to him as "Gringo Loco." Ram calls calls himself Gringo Loco a number of times during the game as well.

Tommy is Ram's twin brother. Tommy is a high-ranking who has devoted his entire career to taking down the Morales Drug Cartel and clearing his father's name. His mission is quickly comprised, though, when he is paralyzed by a grenade, forcing him to spend the rest of his life in a wheelchair. Therefore, he busts his brother out of jail so he can finish the job for him.

A mysterious druglord who is responsible for the death of Ernesto Cruz (Tomas and Ram's father).

Commander Trust is Tommy's boss, and he is not happy about sending Ram in to take down the Morales Drug Cartel.

Cesar Morales is the head of the Morales Drug Cartel.

Angel is Cesar Morales' truck driver. She is also a cop and helps out Ram with taking down Morales.

Special Agent Johnson is Ernesto's former partner, and has put a lot of effort into finding Ernesto's murderer, but with no result. Wears a cowboy hat and packs a humongous revolver.

A high-ranking leader in the Mexican Army, currently employed by Papa Muerte.

Elvez Gonzales is a wealthy playboy, a good friend of Cesar Morales, and also a weapons dealer.

Total Overdose was ported to the PSP in 2007. It released under the title Chili Con Carnage, presumably to avoid association with Total Overdose since it was not critically or financially successful. 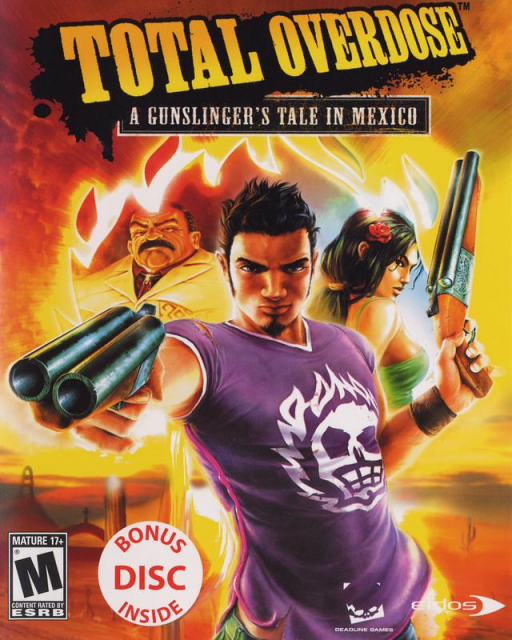