A Konami run-and-gun famous for its fast-paced, gritty, old-school action.

Contra (the arcade version was known as Gryzor in Europe, while the NES version was released as Probotector) is a 1987 video game developed and published by Konami. The player controls a large, muscular soldier as he battles his way through waves of foes. Most of its popularity is credited to its two player co-op mode, a rarity at the time. While the arcade version was popular, the series really began to take off when it was ported to the Nintendo Entertainment System in 1988. Since then, the game has been ported to numerous systems and has had many sequels.

The game's music was composed by Hidenori Maezawa and Kyouhei Sada.

The goal of the game is to traverse several side-scrolling levels. Equipped with a default machine gun, the player has to repeatedly tap the button to fire, something that is changed in the game Contra III: The Alien Wars. Unlike many other games at the time, the player can still fire while jumping. Other weapons can be collected as well by firing upon flying machines that appear in the level. Other weapons included are a machine gun, a laser, a flame thrower and the spread shot. The player can also pick up a power up that enables the player to shoot faster.

There are two different types of levels. First, there is the traditional side-scrolling level, but the second is a third-person shooter. In the third-person shooter levels, the player must explore several rooms in which the player must destroy enemies coming into the room, and destroy the cannons within the room. After defeating all of the rooms a boss is faced. A boss's weak point is often identified by a flashing animation. Guns that available in the side-scrolling level are also available in the third-person levels.

While Konami never gave official names to the various guns & power-ups, the community at large has come up with commonly accepted names for them:

Players take on the roles of Bill Rizer and Lance Bean (codenamed Mad Dog and Scorpion) as they protect earth from an alien invasion known only as Red Falcon. The aliens are supposed to have arrived from a mysterious meteor sixty years previous to the events of the game.

While the Konami Code debuted in Gradius, it achieved legendary status with the incredibly difficult Contra. Using the code, players instantly receive 30 lives, making the game much easier. To activate the code, the player must press: Up, Up, Down, Down, Left, Right, Left, Right, B, A and then press Start (but Start can be pressed before the code is typed, as well).

Another series staple. If one player dies in the two player cooperative mode and runs out of lives, that player can steal lives from the other player by holding down A and B simultaneously.

Normally, players can't shoot while ducking during these levels. But there is a workaround: Hold 'Up' on Controller 2 while ducking using Controller 1. This will result in the bullets being shot at a higher angle, even though the player is prone.

After players beat the game and the credits are done rolling, they can start over with their remaining lives and the same weapon they finished the game with. The game is harder as a result of increased enemy count. The enemies themselves are stronger and shoot more often.

During the ending, hold down Start and Select before the credits start rolling and keep holding it until they are done. This results in a secret ending where Red Falcon vows his revenge.

The European release of Contra was renamed and graphically modified. The arcade version had been released under the name Gryzor but with the same graphics. When the home NES version was going to be released in the PAL region they had to change some of the graphics due to German censorship policies. The name was changed to Probotector a mix of the words Robot and protector, the player characters were changed to robots as well as some enemies.

The Contra protagonists became robots RD008 and RC011, and almost all enemies received a mechanized makeover. European gamers generally remember fondly the Probotector games, as well as similarly-themed games such as Turrican.

In Japan, Konami could improve some aspects of their videogames by utilizing chips inside the cartridges themselves (much like the SNES's Super FX chip), thus overcoming some of the Famicom's limitations.

Contra received a full intro sequence, an extended ending sequence and small cutscenes in between levels with a short report and a minimap depicting where the player is headed next, as well as a large figure of the protagonist firing a gun or listening to a radio. Also, some of the background pieces gained animations, such as the waving trees in the Jungle and Snow Field, and the twitching organic landscape of The Alien's Lair. 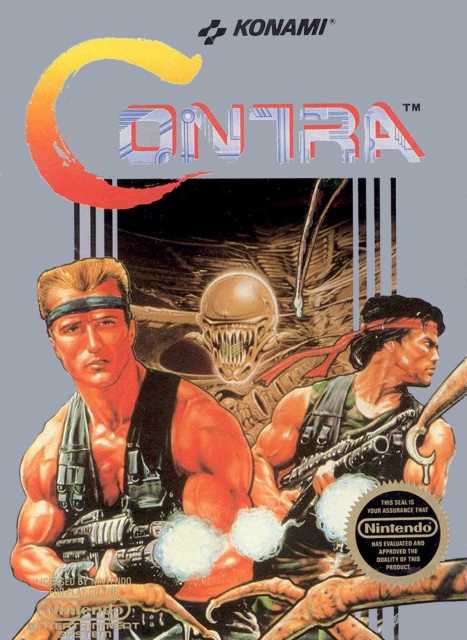