Uncharted 4: A Thief's End is the fourth game in the Uncharted series by Naughty Dog. It is set three years after Uncharted 3: Drake's Deception, with Drake now on the hunt for Henry Avery's treasure alongside his older brother, Sam.

Uncharted 4 is a third-person cover-based shooter with light traversal elements like its predecessors, however it also builds upon the series rudimentary stealth elements to help them more naturally coexist alongside the shooting, somewhat akin to The Last of Us. Players can tag enemies, so they'll permanently have an arrow fixed above their head making them easier to track, and enemies also have a vision cone that begins to fill if the player is caught within their sight. If the cone is filled it changes color from white to yellow, however the enemy still won't have spotted the player completely. If the player doesn't quickly hide away from the guard's sight when the cone is yellow, then the cone will transition to red and the player will have been spotted. The guard that spotted the player will then alert all other guards to the player's presence.

When seen it's still possible for players to retreat back into stealth if they can escape from the enemy's' sight. Though should the player fall back into stealth guards will be more alert than before and their patrol patterns will have altered.

A grappling hook has been added to Drake's repertoire to allow more freedom in traversing environments in and out of combat.

As with Uncharted 2 and Uncharted 3 before it, Uncharted 4 includes competitive multiplayer alongside the single-player.

The multiplayer once again features two teams – one being Heroes and the other Villains – of five gunning at one another. Though what's new is that the multiplayer runs at 60 frames-per-second, with the graphical resolution taking a hitch at 900p. For reference the single-player runs at 1080p/30fps.

The multiplayer took in a lot of influence from The Last of Us's multiplayer component, such as by including a down-but-not-out system, and a custom loadout menu that allows players to build their own classes via weapons selection, gear, and mid-match purchasables.

Fans who had a save of Uncharted: Nathan Drake Collection stored on their PS4 were given access to Uncharted 4's multiplayer beta, which ran from December 3–13, 2015. It was originally dated from December 4, but was pushed forward a day.

The beta included only one mode, being Team Deathmatch, which was playable across two maps – Island and Madagascar. There were five character skins available for each team. The Heroes featured Nathan Drake, Victor Sullivan, Samuel, Elena Fisher, and Charlie Cutter. On the Villains side were Zoran Lazarevic, Harry Flynn, Katherine Marlowe, Knot, and Orca. Harry Flynn, however, wasn't voiced by Steve Valentine, though every other character included the reprisal of their respective voice actors complete with new recorded dialogue for taunts and such.

Also included was the store, which featured a selection of cosmetic items, ranging from full character costumes, hats, and taunts.

The beta was patched extensively throughout its run, eventually reaching version 1.09.013 by the end. This included the requisite fixes, but also involved a number of balance tweaks, such as the semi-auto rifle 'The Mettler' receiving a nerf due to its overpowered status.

An open beta available for all – including those that don't have a PlayStation Plus subscription – began over the first weekend of March, across March 5th and 6th.

The existence of a new Uncharted game for PlayStation 4 was first revealed in a short teaser trailer on November 13, 2013. It wasn't until June 9, 2014, during Sony's E3 conference, that the full title of Uncharted 4: A Thief's End was revealed. A short in-engine trailer of a roughed-up Nathan Drake was shown, with voiceover dialog between Drake and his longtime friend Victor 'Sully' Sullivan that hinted at the game's darker tone.

The creative leads for Uncharted 4 initially included Justin Richmond and Amy Hennig. However, in the midst of early development, Hennig left Naughty Dog for undisclosed reasons, later moving on to Visceral Games as lead writer for the studio's Star Wars project. Though the multi-media site IGN stated that Hennig was in fact "forced out" of the company by The Last of Us & Uncharted 2: Among Thieves directors Neil Druckmann and Bruce Straley, whom are now the current leads for Uncharted 4. This accusation was soon refuted and criticized as ''shoddy reporting'' by Naughty Dog Co-Presidents Evan Wells and Christophe Balestra via an interview with Game Informer.

Richmond also left the company soon after to join Riot Games. Todd Stashwick, the actor who provided the voiceover for the first teaser trailer, left upon the change in leadership and was recast by Troy Baker. Upon leaving Stashwick then joined Amy Hennig – to whom is a friend of Stashwick – in writing Visceral Games' Star Wars project. Once Hennig had left, Nolan North – voice actor for Nathan Drake – stated that they had to scrap eight months worth of work to then start over with the new leads Druckmann and Straley. American actor Alan Tudyk was originally set to star in Uncharted 4, though he too left once Amy Hennig was no longer leading the project.

For Uncharted 4, Druckmann and Straley said they aim to continue the familiar action-heavy style that Uncharted has become known for, while also telling a more mature story in the vein of Naughty Dog's previous game, The Last of Us. Due to concerns from fans in this regard, however, Evan Wells during an interview with Eurogamer went on to state that they consider Uncharted and The Last of Us to be distinctly separate franchises, and are still going to keep the story of Uncharted 4 as a relatively light-hearted affair.

During Sony's PlayStation Experience Keynote livestream on December 7, 2014, gameplay of Uncharted 4 was officially debuted. Running at over 15 minutes long, it shown much of what is said to be expected from the full game, such as a keener focus on stealth and more open environments. What was particularly notable about the live showing was that the game suffered a glitch that resulted in Nathan Drake falling through the game world to his demise. All officially archived footage of the gameplay demo understandably omitted the glitch, however.

While originally slated for a Fall 2015 release, Uncharted 4 was eventually delayed during March 2015 to March 2016. However on December 23, 2015, Uncharted 4 was then delayed even further to April 26, 2016. Uncharted 4 eventually underwent yet another delay to May 10, 2016 to "allow extra manufacturing time". 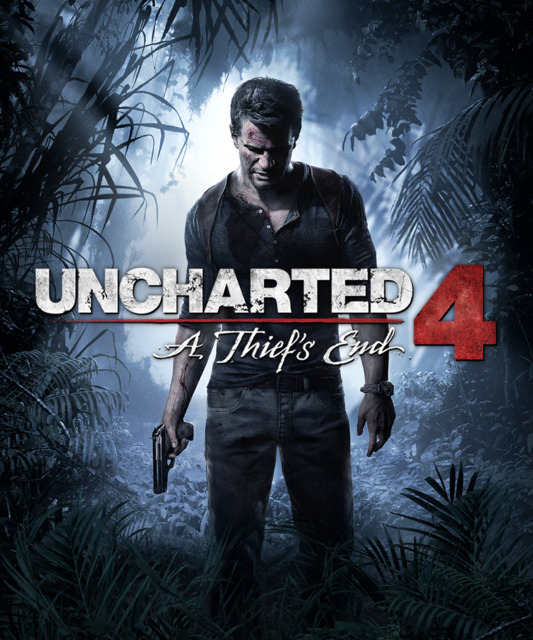