This is the first of a two-part series, followed by Kidou Senshi Gundam Part 2: Tobe Gundam in 1984. Part 1 is based on the first three episodes of the Mobile Suit Gundam television series, while the sequel is based on episodes 4-12 of the series.

Referring to itself as a "ROLE-VENTURE" game, or "real-time role-playing adventure game", this was an adventure game with visual novel and RPG elements, along with shooter segments. In the shooter segments, the controls involve using the 2, 4, 6 and 8 keys to aim and the Space key to fire. 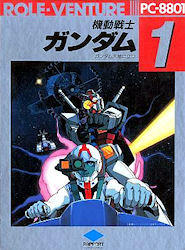