Shattered Planet is a turn-based RPG developed and published by Kitfox Games for PC, Mac, Android, iPhone and iPad. It features procedurally generated levels and over 200 items ranging from orbital strikes to samurai swords. Shattered Planet also features a Daily Challenge, this level is generated the same for everyone allowing players to compare scores and progress.

There is a darkness spreading throughout the universe and the only hope is to search for a cure on distant planets. The Galactic Union has tasked the player with exploring those planets and researching the alien wildlife that inhabit them. The player can capture aliens and befriend them, making them an ally and will strengthen the chances of survival. 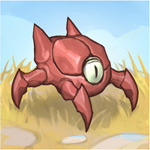