Meimon! Daisan Yakyuubu ("Meimon! The Third Baseball Club") is a baseball sim for the Famicom that is based on a manga and anime of the same name about an underdog highschool baseball team and the drama that surrounds them. The player can access the game's story mode, which depicts scenes from the manga, by selecting "Dramatic Mode" from the title screen menu. This also adds character portraits to the main game mode.

The game itself is a fairly standard NES baseball game. The pitching/batting perspective is from directly behind the batter, and the player moves the entire group of fielders simultaneously whenever the ball is hit. Graphically, the many super-deformed athletes resemble those of Namco's Famista (the series upon which RBI Baseball was based), which was very much the leading baseball franchise at the time. 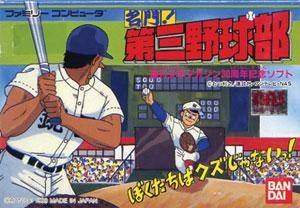