The Tower of Druaga

Players climb the tower, defeat Druaga and rescue Princess Ki in this maze-style, action role-playing game. Originally released by Namco for arcades in 1984, its combination of hack & slash combat and RPG elements laid the foundations for the action RPG genre.

The Tower of Druaga is a maze-based action role-playing game from Namco, created on the Mappy engine and originally released in Arcades in 1984 and later ported to consoles such as the NES, Game Boy and MSX as well as appearing in numerous Namco compilations, such as Namco Museum Vol. 3 for the PlayStation in 1997. The game is the first in the Babylonian Castle Saga and second chronologically. In 1992, the game was remade for the PC Engine which saw numerous changes detailed below. In 2005, the Famicom release was repackaged and distributed in Japan as a pre-order bonus for Baten Kaitos.

Combining hack & slash real-time combat with some basic RPG elements, it laid the foundations for early action role-playing games such as Dragon Slayer and Hydlide. Its hack & slash combat included the ability to both attack with a sword by pressing the attack button and defend with a shield by standing still. It attracted millions of fans in Japan and went on to inspire early action RPGs such as Dragon Slayer, Hydlide, Ys and The Legend of Zelda. The game also debuted the Slime monsters which would later become the mascot of the Dragon Quest series.

The game served the basis of an anime series, The Tower of Druaga: The Aegis of Uruk, from studio Gonzo and was broadcast between April 2008 to March 2009. The anime takes place 60 years after the events of the game. A noteworthy element of the anime is the music, composed by famed video game composer Hitoshi Sakimoto.

Inspired by ancient Babylonian mythology, specifically the Epic of Gilgamesh and Tower of Babel, the game follows a knight named Gilgamesh as he climbs an enormous tower and fights the eponymous Druaga, while rescuing Princess Ki.

Gameplay in Tower of Druaga takes place across 60 floors. Each stage has a timer and requires the player to traverse the maze on each floor and obtain a key and head for the exit, while fighting enemies and obtaining items. If the player loses all their lives, they will be sent back to the first floor. Additional credits do not let the player continue the game.

Almost every floor in the game contains an item which can be obtained after meeting certain criteria, such as defeating enemies or reaching a certain area on the maze. Most items are absolutely crucial in continuing the game and some are necessary to obtain items later in the game. Items include things such as Pickaxes which can destroy walls, Jet Boots which increase the players movement speed, Necklaces or Rings which protect the player from certain enemies and of course more powerful swords. All items are passive, with the only item that could be destroyed being the Pickaxe. They break if the player uses them more than a certain amount of times per level, or by striking an outside wall. They can be upgraded throughout the game and the Gold Pickaxe can be used an unlimited amount of times, but can still be destroyed when using on an outside wall. The acquisition of certain items can be extremely vague and guides exist on the internet which detail how to obtain each item.

Enemies in the are basic at the beginning of the game, but progressively become tougher as they change color, either gaining new abilities or more health. Most enemies will fire projectiles of sorts and in order to block them, the player must be facing the direction of the projective with his sword unsheathed. The player can block the projectiles with their sword drawn, providing they are facing to the side of the projectile. Some enemies will shoot fire, which only travels a short distance but will burn for a short period of time, creating an obstacle for the player. The player can move through the fire if they obtain the Red Necklace.

Differences in the PC Engine remake

As well as receiving a graphical update, the game also grants the user a password system, the ability to select a difficulty and equip items. The player can also increase certain stats at the end of each level which include health, attack power, defense power, agility, speed and pickax. The game was fan-translated in 2007 and the patch is available here.

The music and sound effects to the game were composed and designed by Junko Ozawa. The game's music has been compiled in two releases. The first, 'Game Sound Museum ~Namcot~ 04' was released in 2004, which included music from both the game as well as The Quest of Ki. The second was 'The Tower of Druaga (Original Soundtrack)' which was released for download on iTunes in 2009, available here. Music from the game has appeared in Namco x Capcom and an acoustic version of the Name Entry music appeared in Noby Noby Boy. 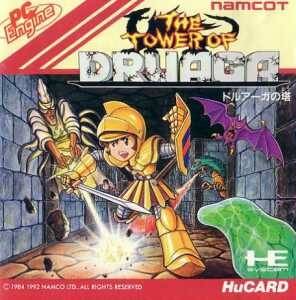