NFL 2K was a launch title for the Dreamcast and was a Hall-of-Fame worthy answer to EA's Madden Football series. You can't coach that.

The first "2K" game released, NFL 2K was introduced by Sega for the Dreamcast when EA Sports decided not to publish its Madden NFL series on the new system. The game's cover athlete was Minnesota Vikings wide receivers Randy Moss

NFL 2K featured the popular Maximum Passing mechanic, allowing players to lead receivers with their passes. The controls, like other 2K sports games that came after, were simple and easy to pick up and play. The Dreamcast also allowed for realistic player and ball physics; passes could be tipped at the line and tackles had to account for player weight. For a launch title, NFL 2K was surprisingly full featured with game modes including;

Commentary featured the fictional team of Dan Stevens and Peter O'Keefe voiced by Terry McGovern and Jay Styne respectively. Both would go on to provide their voices for all seven 2K football game, the last being the unlicensed All-Pro Football 2K8. Critics praised McGovern and Styne's commentary as a great alternative to sports video games that featured real commentary teams. 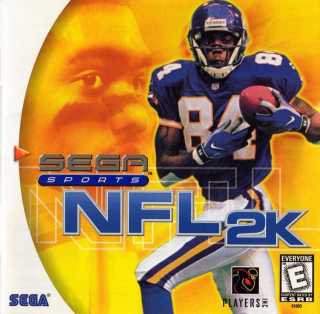