Saints Row: Gat Out of Hell

When The Boss is captured by Satan, it's up to Third Street Saints lieutenants Johnny Gat and Kinzie Kensington to cause as much chaos as possible in Hell to rescue them.
Xbox 360 PlayStation 3 Xbox 360 Games Store PlayStation Network (PS3)

Saints Row: Gat Out of Hell is an over-the-top open-world action-adventure game developed by both Volition and High Voltage and published by Deep Silver for the Xbox One, PlayStation 4, PC (in digital form only, with Linux support added a year later), Xbox 360, and PlayStation 3 on January 20, 2015. The retail PS4 and XONE versions can only be purchased in a bundle with Saints Row IV: Re-Elected.

The game is a spin-off of the Saints Row series, set after the events of Saints Row IV. When Kinzie Kensington's birthday party goes awry and The Boss is sucked into Hell, it's up to Johnny Gat and Kinzie to cause chaos in New Hades in order to stop the forced marriage between The Boss and Satan's daughter, Jezebel. Gat Out Of Hell marks the first time in the series the player must take control of a pre-determined character and cannot play as their own customizable 'Boss'.

Along the way, they will gain a variety of new superpowers (including wings that grant "angelic flight"), insane weaponry (including those based on the seven deadly sins), new diversions (including the ability to kill Dex again and again), and a new set of unlikely allies (including Ultor executive Dane Vogel, twins Kiki and Viola DeWynter, Blackbeard the Pirate, William Shakespeare, and Vlad the Impaler).

Players can import saved games of Saints Row IV (as long as it's on the same platform) to change The Boss's appearance to match the version in the saved game. 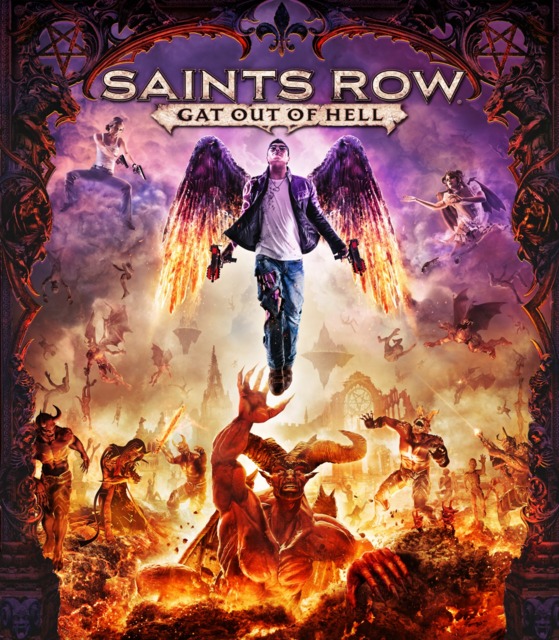