"It's Good to be Bad" in Bullfrog's real-time strategy game, Dungeon Keeper 2.

Dungeon Keeper 2 is a PC game developed by Bullfrog Productions and published by EA in 1999. It is the sequel to the well received Dungeon Keeper and once again focuses on the player, The Keeper, defeating valiant heroes as well as other enemy keepers. Dungeon Keeper 2 featured a more light-hearted tone compared to its predecessor with many humorous aspects added to creature's personalties as well as lines dropped by the omnipresent Mentor which continuously gives the player hints through the campaign.

Players are in control of a dungeon and their goal is to defeat the opposing hero/keeper in order to gain victory. They must manage gold and mana reserves as they construct their dungeon and attract creatures into it with different rooms attracting specific creatures. Once a player has creatures in their dungeon they must then manage the creatures and make sure that they are well fed, have a lair in which to sleep in and are paid their wage on pay-day. Creatures can be used both in combat and in the actual dungeon with some being able to research spells and craft items for the player.

During the game the player is guided by a deep and evil voice known only as "The Mentor" who teaches the player the basics such as construction and combat and provides useful hints and warnings throughout the game for things like payday or when new species of creature enters your dungeon. The Mentor also gives humorous briefings and explanations of the story along with random useless jokes.

My Pet Dungeon is a sandbox game mode in which the player is tasked with creating and maintaining a custom build dungeon with specific goals to accomplish.

Four maps were initially shipped for the limited multiplayer mode. A subsequent patch increased the number to 8.

Set in the land of Harmonia, Dungeon Keeper 2's campaign spans across twenty levels each of which introduce new rooms, creatures, spells and traps which the player then learns how to use to full extent. The objective of each level is usually to defeat a Hero or an enemy keeper in order to claim portal gems. Once all twenty portal gems are gathered then the entrance into the outside world will be opened.

The campaign is presented through a map which the player travels across conquering each land as they progress throughout the campaign.

(*Players are unable to construct a certain room but are able to capture it.)

There are two secret levels that can be unlocked on Dungeon Keeper 2.

Worker units which maintain your dungeon's walls by reinforcing them with magic. They will also dig out earth ang gold for you as well as claim land.

On his own he is a cowardly beast but in a horde he becomes a useful fighting force.

Neccessity's the mother of invention, so 'tis said, and you may find your needs addressed by Warlocks wise who plough through ancients texts and research new spells for you.

The swift light firefly's essential as an airborne scout. His eyes are yours to penetrate dark places and report.

Her sniping skills as sharp as the bolted arrows which she shoots. She serves you well in line behind your fighters, and excels in duty as a guard.

This fearless set of bones needs neither sleep nor nurishment, it's only urge to kill, and when in battle marches forth and slays without remorse.

A graceful ancient lizard who cannot be harmed by fire. He'll even wade through lava streams with no impediment.

He is talented at forcing entry and when possesed can walk unseen.

Acquaint yourself with him - a slavenly beast, whose girth impedes, but size and suborness bear him fruit in battle.

A beast who's cheated death. And if you train and nurture him, he'll learn to do your bidding.

Dangerous and beautiful, The Mistress enjoys torturing your captives and can prove a most terrifying asset on the battlefield.

A hard working creature, the troll will construct many things for you in his workshop.

Martyrs of a long failed crusade the black knight longs for the heat of battle and to destory all goodly things in its path.

Servants to the Dark Golds of Old they are highly respected creatures and are the most powerful creature any Keeper could dream of commanding.

"Need a little help from time to time? I'm yours to call. But when I come, I come to kill. So make sure it's your enemies I slay. For if the fodder's insufficient and your minions block my wall I'll have their blood for breakfast."

The Maiden of the Nest (Made Available via 1.7 Patch)

Half human and half spider, The Maiden will assist your Warlocks in the Library however she is a force to be reckoned with on the battlefield as well.

Each room has its own unique icon (except Dungeon Heart and Portal as they are not eligible for construction:)

A place where creatures can relax for a moment from their busy lives to gamble and consume alcoholic beverages.

This room is an arena where your creatures prove their prowess in such martial sports. Place two or more therein and watch them fight each other unto death. And thus the victor's trained to higher levels in combat skills.

Here's where bodies of the dead are brought to fester. Left to rot in unmarked graves, their gory offerings entice vampires.

A place where creatures subdue their hunger.

A place where creatures come to rest and restore vitality.

Where Warlocks wise can hone their evil craft perfecting spells for you to cast at goodly foes.

A place where imps will drag wounded victims. They'll rot and perish and turn into skeletons.

Strong and durable it can be placed on lava and will endure.

A place of worship within the Dungeon where your creatures may pay homage to the Dark Gods of Old. Place a creatures there and it gains extra happiness and also generates more mana.

The prisoners within, subjected to extremes of agony, will either die revealing secrets as they do, or switch alliegiance to your side.

A place where fighting creatures hone their skills.

A place to store extra gold.

Used to transport creatures across water and lava but will eventually be destroyed by lava.

A place where trolls will come for fabrication of the doors and traps which help defend your evil underground creation.

Here you may place creatures to take up guard duty. They'll keep a watchful eye around the guard room and report back any intruders.

The most precious of all rooms in a dungeon. Without it, there is no dungeon.

A gateway in which creatures enter and leave your dungeon.

Peter Molyneux created the first Dungeon Keeper, but he had no direct role in this sequel.

The game also had a planned sequel, Dungeon Keeper 3. A trailer was even included in Dungeon Keeper 2, but it never came to fruition. Bullfrog Productions dissolved before the sequel could be finished.

The Mentor will drop random lines to amuse you:

If you play the game and your computer's time is set to 3 AM extra Mentor lines will unlock: 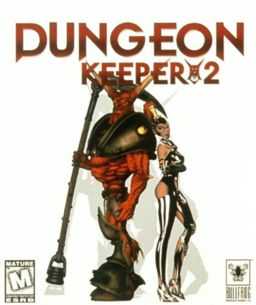