A special version of the original F-Zero for the BS Satellaview, featuring new vehicles and several additional tracks.

BS F-Zero Grand Prix is both a rerelease and a sequel to the original title. The Satellaview add-on was utilized by the game to broadcast pre-recorded commentary and music of far higher quality than was possible on a Super Nintendo cartridge. Though the game largely consisted of tracks from the original game rearranged into different leagues, five new tracks were added and dispersed between the four cups. Additionally, four new machines were included and replace those found in the SNES version; Blue Thunder, Luna Bomber, Green Amazone and Fire Scorpion. These five tracks and four machines were later included in BS F-Zero Grand Prix 2. The game was at one point considered for an American release via cartridge, but was ultimately cancelled. 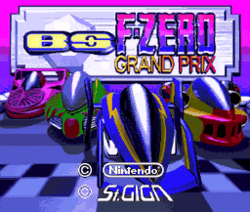