Five party games (including updates for You Don't Know Jack and Fibbage) that can be played locally using the series's signature multi-device multiplayer (where players with phones, tablets, laptops, and other devices can participate using a web-based service).

The first in the annual series of party game compilations of the same name by the creators of the You Don't Know Jack trivia game series, the Jackbox Party Pack includes five games that utilize the multi-device multiplayer format of their previous trivia party game (Fibbage). Instead of using the controller, most games require that all players use smartphones and computers (anything with a web browser) to interact with the game in secret (by directing their web browsers to the Jackbox.TV website).

The games included are: 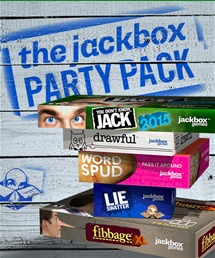