Xak: The Art of Visual Stage

A real-time, dungeon-crawler, action RPG, and the first game in the Xak series from Micro Cabin. It was released for various systems between 1989 and 1993, but was not officially localized into English until a considerable amount of time later.

Xak: The Art of Visual Stage is the first game in the Xak series of RPGs. It was originally released for the NEC PC-8801, but received graphically enhanced ports for the NEC PC-9801, Sharp X68000 and MSX2 Japanese home computers. It also received a Super Famicom port, and was included with its sequel Xak II: Rising of the Redmoon in a compilation for the Turbo CD, which also added anime cutscenes.

The player assumes the role of Latok Kart, a blue-haired swordsman and the son of the legendary warrior Dork Kart. He is sent on a quest to defeat the warmongering demons led by the powerful Badu that are running rampant in the eponymous world of the humans, Xak.

Xak was followed by three sequels and two spin-offs: the lighthearted gaiden game Fray In Magical Adventure, and the meta The Tower of Cabin which is set in the real-life MicroCabin offices but features characters from Xak. 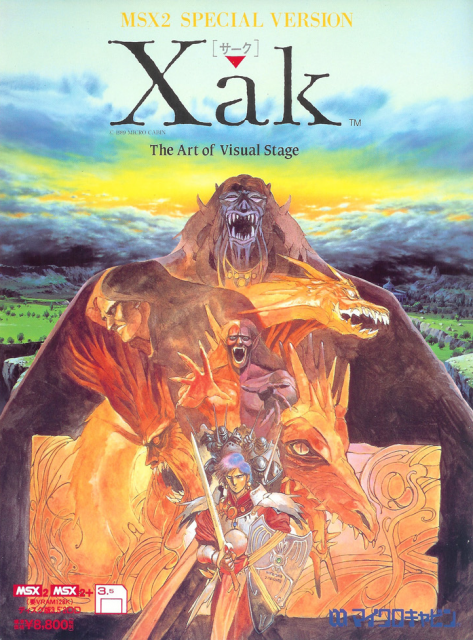