Suikoden Tactics is a tactical role-playing game developed and published by Konami for the PlayStation 2 console as part of their Suikoden series. It is the first game of the series that falls under the strategy role-playing genre.
PlayStation 2

Suikoden Tactics is a strategy role-playing game published and developed by Konami, released for the PlayStation 2. The game was originally titled Rhapsodia in Japan, but as it was a strategy-based spin-off of the more traditional role-playing series Suikoden, it was later re-branded with the Suikoden moniker. The game's plot takes place both before and after the events of Suikoden IV, and the soundtrack was composed by Norikazu Miura, who also helped with the soundtrack for Suikoden IV, and later went on to compose the soundtrack for Suikoden V.

The game's plot begins seven years before the events of the Island Liberation War, which took place in Suikoden IV. We're introduced to a boy named Kyril, whose father dies investigating a powerful and mysterious weapon called a Rune Cannon. Rune Cannons have the effect of turning regular people into violent fish-like creatures. Ten years after his father's death, and now three years after the Island Liberation War, Kyril, now a man, sets out to investigate the Rune Cannons himself, in hopes of destroying them and finding a way to stop the cannons from turning more people into the creatures.

Tactics' plot also serves to flesh out the world explored in Suikoden IV, as well as many plot elements that took place during that game, and it features appearances from many Suikoden IV characters.

Suikoden Tactics' gameplay follows in the mold of most Japanese turn-based strategy role-playing games. The plot is advanced primarily through cut-scenes and by talking to characters, and you can take on sidequests to recruit additional characters, buy equipment, upgrade weaponry, and learn new abilities between battles.

Battles take place on a traditional grid-based map, wherein you and the enemy take turns moving a squad of characters around the map, utilizing combat and abilities in combination with strategic use of terrain and character placement to overcome your foes.

Suikoden Tactics has received generally mixed reviews in the West, with an average aggregate Metacritic score of around 68%. Many reviews cited the game's user-friendly design as a positive, but criticized the game's plot as being cliché, with weak characters and poor voice acting. Many also cited the graphics as being sub-standard.

The Stars of Destiny

The following is a complete account of all the characters that will join your quest. 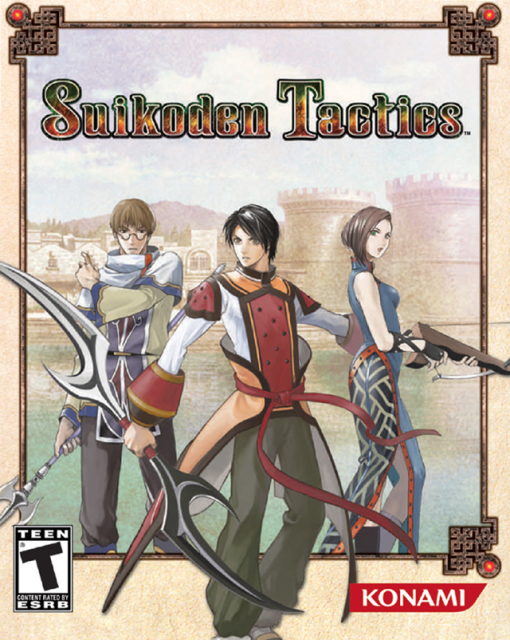