This baseball game from Epoch has a lot in common with Namco's Family Stadium series.

Famicom Yakyū-ban is a baseball game for the Famicom (NES), developed by SAS Sakata and published by Epoch Co., Ltd. in late 1989, and is the first Epoch-released game for a system they did not make themselves. It is based nominally on Epoch's Yakyuuban series of physical baseball toys, which used pinball mechanics to simulate batting.

Although Epoch fans usually consider it a spiritual successor to their earlier Baseball series, by-and-large it is compared to Namco's FamiSta titles. 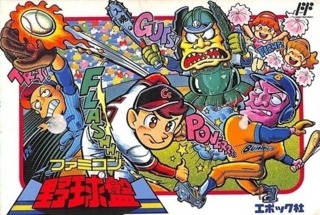