Serious Sam II ramps up the over-the-top shooting and humor the series is known for with more ridiculous weapons and enemies.

Serious Sam 2 starts shortly after the end of its predecessor, Serious Sam: The Second Encounter, with series protagonist, Sam "Serious" Stone, continuing on his quest to thwart the alien invasion. The game begins with Sam being summoned by the Sirian Great Council, who ask Sam to destroy the great evil that is Mental. The Council also tells Sam that to accomplish this, he must collect five pieces of an ancient medallion, each held by various groups on different worlds. Only with all five medallion pieces in hand will Sam be able to truly destroy Mental.

Serious Sam II, like the previous games in the Serious Sam series, is a breakneck-paced, singularly-focused first-person shooter. The core action of the game consists of the player fending off large numbers of enemies at once, using a wide arsenal of weapons, spanning 90's FPS standbys like rocket launchers and miniguns to more exaggerated ones like enormous cannons that fire enormous cannonballs. Nearly all other forms of gameplay are distilled out in favor of more over-the-top shooting action. Puzzles are essentially nonexistent. Platforming is kept to a very bare minimum. Occasionally, it is required to collect one or more keys or press one or more switches to open a locked door to progress with the game. Often each key collected or switch pressed spawns even more enemies for Sam to fight.

Serious Sam II introduces some elements to the gameplay formula established in previous Serious Sam games, including vehicles (hover bikes and hover saucers), interactive mounted turrets (of rocket launcher, machine gun, and laser varieties), and a limited save system. Whereas previous Serious Sam games allowed the player, upon dying, to respawn from the most recent checkpoint indefinitely, Serious Sam II imposes a limit to the number of these checkpoint respawns before the player is given a proper game over and then booted back to the start of the game to begin anew. Also, the blood and gore effects have been intensified and improved graphically.

Serious Sam II shipped with only single-player and co-op modes. Later, multiplayer deathmatch was added in the v2.068 retail patch.

All of the weapons in Serious Sam II have been remodeled, becoming even more bizarre than before. Staples like the rocket launcher, grenade launcher, double-barrel sawed-off shotgun, sniper rifle, and minigun all return. As does fan-favorite, The Serious Bomb, remaining the most powerful weapon in the game by far, but remaining limited to carrying no more than two due to their massive size.

New weapons to the game are: 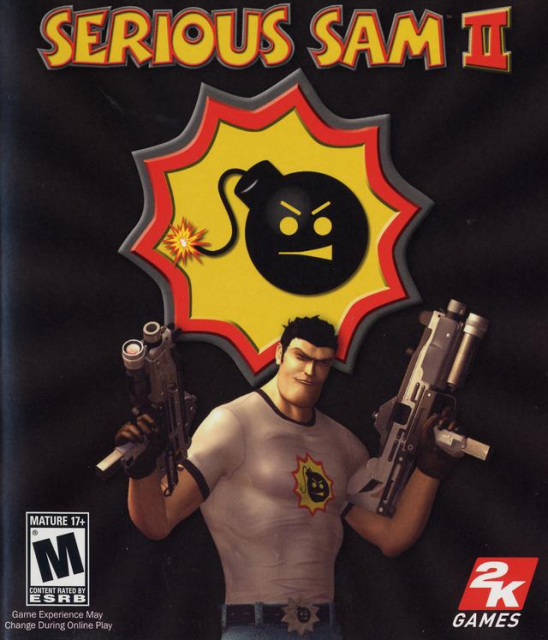