A football game licensed by the Entertainment and Sports Programming Network and named for their 1987-2005 weekly TV series.

ESPN Sunday Night NFL is a football game based on the TV show of the same name, which aired on the ESPN when the game was out in 1994. It was released on the Super Nintendo, Genesis and the Sega CD. The game uses a vertical perspective common to football games of the era, using sprite scaling as the ball travels the field to zoom in and out on the players.

The game has the NFL license, so the player can choose between twenty-eight teams present in the 1994 AFC and NFC leagues. The stats are approximate to the quality of the teams at the time, with certain teams vastly overpowering others in offense and defense. 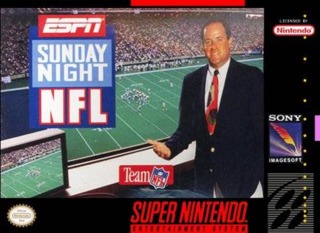