A side-scrolling action game based on the 1994 sci-fi dystopian movie.

No Escape is a sci-fi action game from Bits Laboratory and Sony Imagesoft. It is based on the 1994 No Escape movie starring Ray Liotta, Kevin Dillon and Ernie Hudson, who are all pictured on the game's box art. The player, as the movie's protagonist Robbins (Liotta's character), must first escape the feral "Outsiders" of the prison island of Absolom and then ascertain a way off the island in spite of the number of gunships and attack helicopters that sit nearby in case of an escape.

The game is depicted a side-scrolling action game, where the player is limited by what weapons they can find. It loosely follows the events of the movie.

The game was released on Sega Genesis, Super Nintendo and PC in late 1994, around seven months after the movie itself. 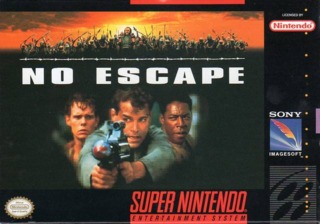