One of the PSP's most lauded launch titles, Lumines is a classic example of rhythm action developer Tetsuya Mizuguchi's development style, combining engrossing gameplay with heavy beats to produce a unique experience. Lumines is basically Tetris in a Tokyo dance club. The puzzle aspect is simple enough: The player has to move and rotate falling squares made up of four blocks each. Each of these four blocks can be one of two colors, and creating a square of four same-colored blocks will cause that square to be cleared from the game board when it's swept over by a line which continually crosses the screen from left to right. Connecting multiple matches into a larger shape before it's cleared by the line will result in combos that yield more points. Lumines' energetic techno soundtrack is a major draw; it features an eclectic mix of Japanese artists like Mondo Grosso working in a variety of electronic musical styles. Each time the song changes, the background and block graphics change to a new visual style corresponding to the style of the new song. More importantly, the music has a direct impact on the gameplay, in that the speed of the falling blocks and the line sweeping the screen are tailored to the tempo of the current song.

Background skins and music will changes you progress in the game. This game mode does not have a time limit.

Select a background skin and use the skin throughout the entire game. The background will not change unless the player selects a new skin.

The playing field is split into two. The more squares you eliminate the larger your part of the field becomes, making it harder for your opponent.

Play by yourself against the CPU opponent in Vs 2 player style gameplay.

The CPU will create puzzles with obstacles to overcome.

The maximum score in the game is 999 999 points. This is supposedly due to the limited battery life of the PSP. Had the maximum score been higher, players might have had problems reaching it because the battery would have run out.

Lumines is well known as one of several games that can be used to install a custom firmware onto the console. It is possible to exploit a buffer overflow in the game code by loading a fake game save containing firmware loading code. 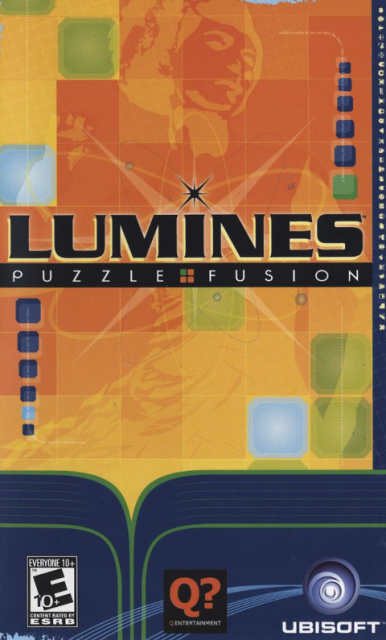