The Flintstones: The Movie

A Flintstones platformer game based on the 1994 film. The game was released for the SNES, Game Boy and Sega Genesis (Sega Channel exclusive).

The Flintstones, or The Flintstones: The Movie as the Game Boy version is known, is a side-scrolling 2D licensed platformer based on the live-action movie adaptation of the prehistoric-themed Hanna Barbera cartoon of the same name.

As Fred Flintstone, the player loosely moves through the events of the movie in a series of themed levels. The goal is to stop the movie's antagonist, the villainous executive Cliff Vandercave, who creates a new problem between each set of levels for Fred to resolve. The game's progress is saved by a unique password system that involves recreating a four-word phrase, such as "Fred Loves Magic Fruit". 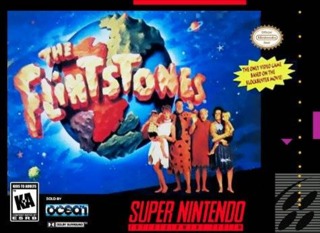