The platforming sequel to the TwinBee shoot'em up games.

Pop'n TwinBee Rainbow Bell Adventures is an action platformer spin-off to Konami's TwinBee vertical shooter series. In the game the player controls one of three anthropomorphic ships from the shoot 'em up series, including Twinbee, Gwinbee and Winbee. TwinBee: Rainbow Bell Adventure was originally published in Japan for the Super Famicom on January 7, 1994 and was released in the Europe later that year. However the European version removed all of the game's dialogue, the secret endings, and the battery save function among other features. An English fan translation patch for Rainbow Bell Adventures was created by Aeon Genesis on November 14, 2013 which retained all of the game's content.

The eponymous Rainbow Bell is what keeps peace in the galaxy. However, Dr. Warmon and his army of Zakobee troopers have invaded the kingdom and stolen the Rainbow Bell for his own nefarious purposes. As a result, the Princess of the bell's protectors, Melora, starts to mysteriously vanish. It's up to Twinbee, Winbee and Gwinbee and their human pilots to stop Dr. Warmon, recover the Rainbow Bell and save Princess Melora.

The player must pass through several stages to their end to continue. Along the way, they can explore the stage for cat bell collectibles, the number of which is provided at the bottom of the screen.

The player is limited to a punch, but can find weapons by collecting power-ups. Both the attack and jump buttons can be held down to charge them up: A charged-up punch will destroy thin wall tiles and a charged-up jump allows the player to fly a small distance.

The trio can also find the colored bell power-ups from the prior shoot 'em up games, each of which provides a different upgrade. Getting hit will lose a number of power-ups currently held, but because they fly off the player they can be recovered if the player's fast enough (like Sonic's rings). 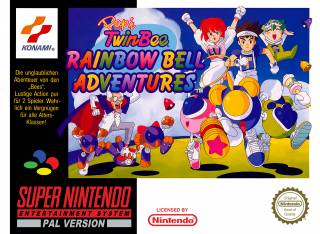