A Super Famicom-exclusive sequel to the block-stacking arcade game.

The goal of the game is to create a means to get a small bald character to each level's exit. They can do this by stacking falling blocks Tetris-style to form stairs to the exit, but they can also let this character walk on top of a still-active block and move that block across the screen to the exit. The player can make use of a number of power-ups as they fall down the screen in lieu of the usual blocks. The character must escape before the stage floods. Two players can also compete to reach the exit first, dropping traps on their opponent to slow them down.

The game makes a few significant changes to the original Super Gussun Oyoyo. The most apparent of which is its new setting of a tropical island with an active volcano: many stages will start dropping fireballs the longer the player takes, which must be avoided at all costs. The game also features a new "Puzzle Mode" which plays similarly to those found in Tetris sequels: the player has a limited number of pre-determined pieces and must figure out how to use them to get their little bald friend to the end. 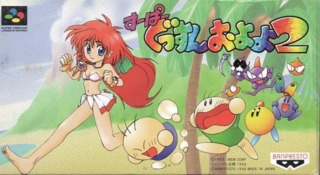