Super Puzzle Fighter II Turbo HD Remix (SPF2THD) is an updated version of the original PS1 game of the same name for PSN and XBLA. It features high definition backgrounds, blocks, character art and menus, although the in-game character sprites have not been changed since the original and as a consequence now appear blurry. The remix can be played by two people locally or over the respective console networks. Note that neither this nor the original game are in fact sequels - the title is essentially an 'in joke' about the number of Street Fighter sequels and their lengthy subtitles.

SPF2THD is a competitive puzzle game. 2 players face each other (or 1 player can face the AI) over a best of three fight, similar to regular Street Fighter. Each player has an area in which to arrange dropping pairs of blocks of different colors into larger 'gems'. These gems are then destroyed using separate 'crash gems', which when placed touching blocks of the same colour cause them to explode removing them from the area. The competitive element arises from the fact that destroying blocks on your side drops 'counter blocks' onto your opponent. Damage done in this fashion increases with the size of the gem destroyed, and if any chain reactions among other colors occur at the same time. The player who has his area fill up with blocks first loses, similar to Columns or Tetris.

Games tend to build up to a frantic pace after about a minute, with both players building and detonating large gems onto each other. The outcome of a given match is never predictable, as a player with an almost full screen of blocks can often produce a devastating counter attack if they are not quickly finished off.

The HD remix features the same cast as the original game - a mixture of Street Fighter characters and DarkStalkers characters, another Capcom fighting franchise. They are super-deformed or cute versions of the characters rather than realistic models. Character selection determines the avatar that represents your area, and they will gesticulate and perform characteristic special moves (for example Ken will perform a dragon punch if you destroy a suitably large gem). On a tactical level, character selection matters because it determines the colour and pattern of the blocks that drop on your enemy after an attack. For example Ryu drops his blocks in a column pattern, while Ken drops his in horizontal stripes. Knowing the pattern of your opponent can be helpful in deciding what colour gems to build and where to position them.

Three extra hidden characters can be selected by moving the selection box down out of the usual frame on the character select screen. Akuma and Devilot are roughly equivalent and arguably the strongest characters, while Dan only drops red gems on his enemy and as such is extremely weak.

Super Puzzle Fighter II Turbo HD Remix was ported by Backbone Entertainment, and a number of changes were implemented in their version of the game. 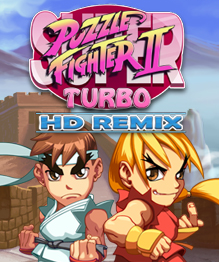