Co-op pixel art brick breaking game. Someone has stolen Elene's beloved pet Sachiro, and she and her sister Marie are determined to bring him home.

Strikey Sisters is a fantasy action brick-breaker game that features local two-player co-op mode, three different difficulties and colorful pixel art aesthetics. It was originally released on Steam for PC and Mac in the summer of 2017, and was later ported to the Nintendo Switch in February 2019.

The goal of each level is to destroy all the blocks on the stage and then defeat any remaining enemies, which respawn until all the blocks are gone. Blocks drop coins which can be collected by walking over to them and will unlock various collectibles once enough have been obtained, while enemies drop useful power-ups intended to clear the screen faster or make the player's life easier.

The story of the game sees sisters Marie (a brash redheaded tomboy) and Elene (a quiet hooded girl who is unfailingly polite) on the trail of their missing pet, interrogating any monsters they come across for clues. 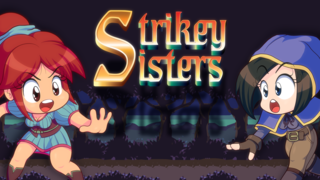