Crazy Bus is a bus driving simulator where players take control of a bus driver who must travel distances to obtain points.

Crazy Bus is a game developed by Tom Maneiro of Tom Scripts LTDA in Venezuela. The game is known for its terrible gameplay and awful soundtrack. The game had an unfinished version in 2004, where it was done to observe the capabilities of the developer's BASIC compiler. Despite the fact that all of the songs in the game are not projected correctly, the game was also originally intended to verify if the developer's sound drivers were working as desired. The music can be fixed by adjusting it to C Major. Crazy Bus had its full game released a year later and is only available in Spanish, with a few sentences presented in English.

The objective of Crazy Bus is to get the bus driver to the longest possible distance. To do this, the player must use the d-pad to move the vehicle and the buttons to honk the bus's horn. The longest possible distance that can be achieved is 65535, which is one digit smaller than the largest unsigned short integer. If the player chooses to any further, the numbers will reset back to zero. This max distance can also be achieved by driving in reverse, which subtracts your current points. Going lower than zero will set the points to its max value. Players can choose from a number of buses to accomplish this mission.

Every bus is available from the start; there are no unlockables. Despite each bus appearing to have their own stats as presented by the bus selection menu, there is no difference in each bus's gameplay. 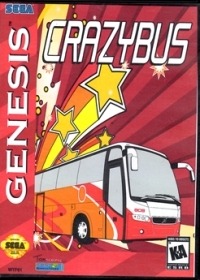