World in Conflict puts the player into a Cold War scenario in which the Soviets mount a full scale invasion on Europe and America.

World in Conflict is a Real-Time Strategy game developed by the Swedish game company Massive Entertainment and published by Sierra Entertainment (later Ubisoft Entertainment). World in Conflict takes place in 1989, but instead of the Cold War coming to a close, the Soviet Union attacks and a "World War III" begins. While World in Conflict is considered to be an RTS, it plays dramatically different than a traditional RTS. Players are allotted a certain number of "Reinforcement Points" that they can use to call in support. Depending on their "Role" (which class of units they specialize in) in the battle, players can call on certain units to aid in the overall conflict. As a player helps their team, either by destroying enemies or by capturing and reinforcing "Command Points,” they earn "Tactical Aid Points" used to call in support from off the battlefield. World in Conflict emphasizes team-play over individual actions. Players that work more cohesively and as a team, balancing the distribution of roles and making maximum use of their Tactical Aid, will often times be the victorious team.

The US collector's edition of World in Conflict came with an authentic piece of the Berlin Wall, as well as other extra content and achievements in game. World in Conflict received its first expansion, a "mission pack" entitled World In Conflict: Soviet Assault in 2009.

World in Conflict is a real-time strategy game with several aspects of real-time tactical games. As such, it plays quite differently from the average at times.

Players begin by choosing a team: depending on the map, players choose between the US and NATO, or the Soviet Union. The player is given a choice of four roles during a match: infantry, air, support, or armor.

Each player receives their units from their role at a lower price than an out-of-role player would and has access to units other players not using that role cannot use. These exclusive units are usually specialized or heavy versions of other units, such as the Heavy Attack Helicopter or the Heavy Tank. The roles (and their deficiencies) form the main emphasis on teamwork and coordination in the game. Though it is possible for a single role to win the day, no single group can match the capability of the others working in tandem.

Match game modes consist of either Domination, Assault, or Tug of War.

A player begins the match with a finite pool of reinforcement points that they can use to order as many units as they wish. Players then mark a drop zone for their units within the territory their team controls. Once the units are ordered, they will automatically be dropped into the battle at the marked location and the supply aircraft returns to base, acting as a cool down between reinforcements for each player.

When you lose a unit, its cost in reinforcement points is immediately added to a secondary point pool that gradually bleeds back into your usable reinforcement points. The rate of this transfer is directly proportional to the amount of points sitting in the secondary pool, so if you lose a heavy tank (worth 1200 points) it will start out coming back at about 50 points a second but after a while it will slow to a crawl of about 3 or 5 points a second. This secondary pool exists to increase the gravity of decisive blows to you or your opponent which would, otherwise, have practically no effect on the units in the field.

Tactical Aid consists of strategic abilities that can be used to quickly turn the tide of battle, or help suppress enemies or support allies. Aid is divided into three categories: Non-destructive, Selective Strikes and Indiscriminate Strikes.

World in Conflict provides players with many visual cues as a match progresses. As a battle becomes one-sided or reaches closer to the end, colors will shift from the brighter tones seen at the beginning of a match to much more drab and sorrowful palette. Grays and blues will begin to filter in, creating a gritty and tense feel as a battle continues. Similarly, a map will stay scarred throughout a match as players make use of unit special abilities and Tactical Aid.

Though it is a strategy game at heart, World in Conflict definitely possesses more tactical elements than the usual RTS. It, like many recent games in its genre, has increased the number of realistic effects upon the forces in the game. For example, tanks take more damage from the back where they are less armored; Infantry gain not only protection from buildings but also concealment as an enemy unit must be very close to observe troops garrisoned inside a structure; instead of opting for a more equivalent nature between aircraft and tanks that was held in games of older generations, the developers made helicopters extremely mobile and vicious attackers compared to their armored siblings. However, if a helicopter is hit by an AA missile, it goes down regardless of its size, a concept that tanks do not follow. Many of these realistic touches are simply nuances but a number of them will have profound influence on the tactics employed by an attentive player.

World in Conflict has gone against a recent trend of reducing advanced controls and formations, giving the player a multitude of options for how order their forces around on the battlefield. The bottom of the GUI is loaded with button for things like moving units backward while keeping a forward facing, garrisoning in nearby buildings, and force moving through territory. While many of these commands are unnecessary at a general of play, mastering them allows player to maneuver their forces much easier.

Every unit has at least one special ability, but they usually have both an offensive and defensive ability that can be used to maximize their potential in battle. The defensive abilities are mostly standardized across the units. All infantry units have the ability to sprint as their defensive power, where they double their movement at the cost of being able to fire their weapons; all tanks have a smoke screen that puts up a temporary Fog of War effect in the immediate vicinity; all aircraft have chaff they can use to evade missile attacks if said missiles come from behind. The offensive abilities are far more diverse, ranging from AT missiles to white phosphorus grenades. These abilities all have a cooldown timer between uses.

Veterancy improves troops incrementally and fundamentally, gained over time by killing foes (or assisting allies in the case of repair troops). There are five levels of veterancy, each giving the endowed unit damage and defense bonuses as well as reduced cooldown timers on special abilities. These perks encourage players to preserve their units instead of exploiting the decidedly lenient reinforcement system by sending them on frequent suicide missions from a lack of real consequence for doing so.

As the 80s drew to a close, the Soviet Union found itself in disarray, desperate for supplies. While attempting to keep pace with the United States and programs such as Reagan's "Star Wars" missile defense system, the USSR spent untold sums of money and was forced to make several cuts that threw many into famine and under-supplied much of their country. Without means to replenish their stocks and help their citizens, the Soviet Union decides to blackmail Western Europe, demanding their needed supplies and threatening to take them by force if necessary. The western world saw this as a bluff and shrugged off the Soviet threat, leaving them vulnerable to the war machine already mobilizing to follow through with their threat. In an instant, the Soviets crossed the Iron Curtain and swept through much of Europe in an unexpected offensive, but after several months of fighting, reinforcements came in to supply the western front and halt the Soviet advance. Led by Colonel Sawyer with the aid of his two officers 1st Lieutenant Parker and Captain Banner, the American reinforcements were able to assist the NATO forces in pushing the Soviets out of France, and prevent them from launching nuclear strikes on the United States via submarine. Although the Soviet offensive had been halted, it was not without great costs, and it left the whole world watching the conflict in Europe. The Soviets though had their eyes on a completely different front, the United States. Players begin the campaign in Seattle where the Soviets launch a surprise naval invasion.

The initial Soviet invasion left the United States dumbfounded. Cpt. Banner once again found himself in company with Lt. Parker as they attempted to stave off the Soviet invasion. Despite their valiant efforts, within the first hours of the war, Seattle had been lost and the Soviets quickly gained ground. Troops stationed near and around the city were forced to evacuate what civilians they could and then make a full retreat. Eventually, Cpt. Banner and Lt. Parker found themselves once again led by Colonel Sawyer as US forces manage to buckle down and halt the expansion. But the Soviets had already taken portions of Washington State, and they began to call in reinforcements to launch a new attack through the Cascade Mountains. Desperate to protect the secret of the "Star Wars" missile defense program, the fact that it never existed, the vastly out-numbered and under-supplied American forces were left with only one option; to launch a tactical nuclear missile onto their own soil. Banner, in a heroic display of courage decides that he and his company will remain behind to hold the Soviets as the missile is launched on his location.

The nuclear strike left the Soviet troops in disarray, and the landscape of the Cascade Mountains a bleak and unforgiving warzone. When the American forces finally regroup they are met with grim news; The People's Army of China has joined forces with the Soviets in their attack on America and are sending a massive force across the Pacific Ocean. In a desperate bid to prevent the Chinese from making landfall, Colonel Sawyer orders his forces to proceed with an all-out offensive on the Soviet HQ, Seattle. Saywers troops successfully capture Seattle from the Soviets, thus preventing the Chinese from making landfall on American soil as they are not able to engage in an all-out amphibious assault.

Lt. Parker is told that he may be called back into battle at a point in the near future, possibly hinting at an expansion. 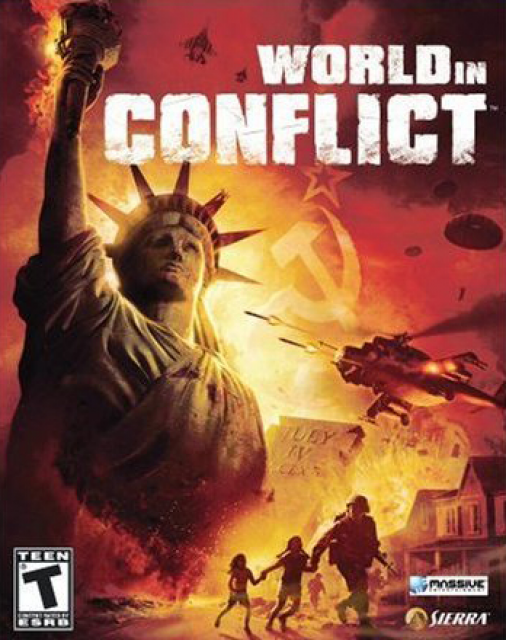