Commonly cited as the founding title in the god game genre, Populous is a computer game from Bullfrog Productions in which the player is a deity that must help its followers become prosperous enough to overcoming rival deities and their followers.

Released in 1989, Populous was the third offering of Peter Molyneux's then-nascent UK development studio, Bullfrog Productions, and it was the company's first title to be met with both widespread commercial success and a significant amount of critical recognition. Originally developed for the Amiga, Atari ST, and PC platforms, the premise of Populous is simple: the player is a god, and as such, has world-altering powers that can be used for the betterment of one's own devotees or the detriment of all unbelievers. From an isometric perspective, the player uses both direct control of the game world and indirect interaction with followers in order to ensure the prosperity and growth of their people first and foremost. The player's divine powers grow in direct relation to the overall fortunes of their faithful, and the ultimate objective of each scenario is to become powerful enough to challenge and conquer an opposing deity with worshipers and abilities of its own.

Aside from putting Bullfrog Productions and its designer Peter Molyneux on the proverbial map as game developers, Populous was an influential game in its own right recognized by many as the starting point of the god game, a sub-genre of strategy/simulation games in which players are cast as powerful beings whose prime directive is the stewardship of their followers. Many of the mechanics laid down in Populous would be used in future Bullfrog games (Powermonger and Dungeon Keeper, for instance), and Molyneux's first project at Lionhead Studios, 2001's Black & White, is commonly viewed as an attempt to evolve the ideas presented in the Populous games, and as a result is often called the spiritual successor to the series. Furthermore, games made thereafter, such as 2011's From Dust, that feature environmental manipulation for the specific purpose of aiding a group of people outside of the player's direct control are usually said to draw their lineage directly from Populous.

The success of Populous led to two expansions, The Promised Lands and The Final Frontier (both of which were released in 1989), as well as two sequels, Populous II: Trials of the Olympian Gods in 1992, and Populous: The Beginning in 1998. In 2008, an updated port of Populous dubbed Populous DS was released for the Nintendo DS by Japanese developer Genki. It was created with the ostensible goal of "retaining the feel" of the original Populous while also adding new features such as updated visuals, touch screen support, wireless multiplayer, and five new gods each with distinct gameplay differences.

The most important imperative in the game is the growth of one's follower population (hence the game's name). The player can facilitate faster growth primarily by ensuring that followers have adequate surfaces upon which to build their settlements. The more uniform the landscape, the larger the settlement that can be built there, and larger settlements reward players with greater defense and better technology. Smaller settlements do have their place, though, as they are quicker to erect and much faster to populate, making for much more rapid expansion. Population size affects what abilities the player has access to, as all physical manifestations of divine power cost manna, and this manna is directly derived from followers, thus more of one means more of the other. Additionally, since the player exerts no direct control over their subjects, having a numerical advantage is the easiest way to ensure victory when encountering rival followers. Many godly powers, such as Earthquake and Volcano, are directly designed to hinder an opponent's ability to effectively settle their land and thus grow stronger.

Once one's follower population has grown to a sufficient size, the player's main goal is to overcome an enemy deity whose presence threatens their own supremacy. Encounters with the enemy will happen as a natural byproduct of expansion on most maps, though when the time comes followers can also be directed specifically to seek out and subdue opposing settlers. In order to be fully victorious and move on to the next map, all enemy followers and domiciles must be killed or destroyed. Opposing forces will automatically fight when they come into contact with one another, and the victor is determined purely on relative strength, which is in turn determined by the number of followers in a stack and the level of technology they possess. Settlement size comes into play here once again, as larger buildings allow for greater technological achievements than smaller ones. The number of citizens within a stack can be increased manually by ordering followers to gather together; any two friendly units which contact one another will combine into a single, stronger unit.

Populous has three main modes of play: Tutorial, Conquest, and Custom. The Tutorial mode consists of a preset map designed more than anything to allow players to familiarize themselves with the game's controls and the various powers at their disposal. Conquest is the main mode of Populous, which allows players to progress through a series of 500 maps, conquering one world at a time before moving on to the next. Player performance is key to progression in this mode, as the player does not simply progress in linear fashion through each map. Rather, the player's score at the end of each mission is taken as an indicator of one's relative skill, and the difficulty of the next mission is chosen as a direct reflection of said score. Mission objective do not change over the course of Conquest mode, though the aptitude of one's opposition (as well as the powers available to them) will increase over time. Several different terrain types come into play as well, though their effects on gameplay is decidedly subtle. Settlers can die more easily on a desert world, for example, and population growth is stunted on an ice planet. Though the player can save their game at any time, the name of each planet also serves as a password of sorts, allowing players to jump to a specific world by simply inputting its name. The final mode of play is Custom, which pulls triple duty of serving as the game's portal for playing scenarios with customized parameters, creating custom maps, and also connecting to a second player (via modem) for multiplayer skirmishes.

Seeing as the player has no real dominion over the individual activities of worshipers, various tools are provided to allow players to quickly survey their surroundings and also gauge the level of efficacy of followers and buildings. Individual targets can be selected at any time by using the Query button, which causes a shield icon to appear next to the selected object. This indicates that any information appearing in the upper-right status shield pertains specifically to this target (which can in turn be located at any time by using the Zoom to Shield button). The status shield is divided into four quadrants. The quadrant in the upper left simply indicates which side the selected target belongs to, with an ankh signifying good, and a skull signifying evil. The quadrant to its right shows the target's level of sophistication, with more advanced weapon icons indicating a greater level of technology. The lower left quadrant shows a representation of the selected target, while the lower right displays two bars. In the case of a building, these bars show overall defense in yellow on the left, and progress toward production of the next follower in green on the right. In the case of followers, two orange bars showing unit strength fill over time. Once both bars have been filled, the left bar changes to yellow, indicating that it is gauging higher strength values than before. On either side of the Information Shield are two additional bars which show the population size of both the good and evil players on the left and right sides respectively.

Though no true control is given over one's followers (alternately called walkers) in Populous, as the object of their worship the player is given the prerogative to direct the focus of their attentions. There are four options for influencing the behavior of walkers, and regardless of which is chosen, the player's people will dutifully endeavor to conform to this mandate in order to better satisfy their god. Directives do not require manna in the same way that physical manifestations of power do, though at the same time their effects are not nearly as dramatic nor as immediate.

Often it is required that a god take matters into its own hands, and for these situations there are a variety of choices for direct intervention. Just below the player's Information Shield is the Manna Bar, which shows what godly powers are currently available for use. Various icons representing specific powers are arrayed along this bar, and once the Manna Bar's indicator arrow has reached the icon for a specific power, this indicates that it can be used. These range from minor displays like slightly modifying the height of land to more cataclysmic ones like Armageddon. Having a larger number of followers will raise the manna indicator arrow quicker and also allow for more frequent use of powers, as manna can be replenished more quickly with more devotees. 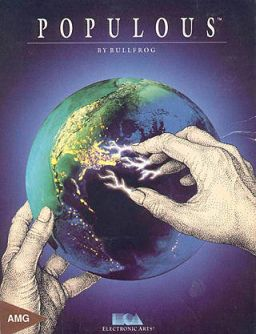