A strategy game based on a Japanese comedy drama manga about an overbearing high school cheerleading squad.

Meimon! Takonishi Ouendan (usually localized as "The West Tako Cheerleaders", but literally translates to "Prestigious School! West Tako Cheerleading Squad") is a Famicom strategy game based on the manga of the same name about a young man who joins his school's intimidating cheerleading squad. In 1987, this same property also saw a live-action movie adaptation.

The game has players moving characters around a city map and fighting rival ouendan teams for dominance. Combat occurs whenever two units meet on the map and cuts to a timing-based mini-game where the player has to input a command before their opponent's fist reaches the current character's profile. The closer the fist gets, the more likely it is that the enemy gets in their attack before the player can. Stronger attacks are listed further down the menu, increasing the risk vs. reward factor as the player scrambles to execute them in time.

After winning a map, the player's party can gain levels and acquire new special attacks, which show up in the attack menu on rare occasions and are very powerful. 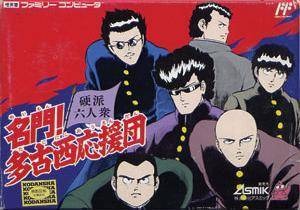