An RPG based on the historical novel Eight Dog Chronicles which allows the player to begin the game as any of the eight titular samurai, each of whom begins in a different part of the country.

Shin Satomi Hakkenden: Hikari to Yami no Tatakai ("New Eight Dog Chronicles: Battle of Light and Darkness") is a traditional Japanese RPG that follows the story of the 19th century historical novel Nansou Satomi Hakkenden, or Eight Dog Chronicles, based on eight half-brother samurai who were all descended from a dog and team up for various adventures across Sengoku period Japan. In particular, the game is based on the 1983 live-action movie, localized in the west as Legend of the Eight Samurai which in turn was based on a 1982 reworking of the epic novel named Shin Satomi Hakkenden.

The game has a then-distinct feature of being able to start the game as any of the eight samurai, each of which begins the game in a different location. Their goal is to meet up and recruit their brothers, eventually forming a group of eight. The game is otherwise standard for the genre: the player splits their time between exploring towns and talking to NPCs, and fighting monsters and enemy soldiers in dungeons and the overworld map via a turn-based combat system. 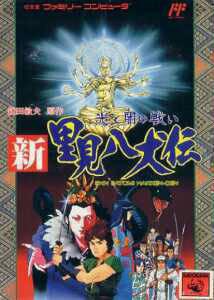