A whac-a-mole style action game that was released with special hammer and mat peripherals.

Super Mogura Tataki!! Pokkun Mogura ("Super Mole Bash!! Pokkun Mole") is an action game for Famicom based on the classic fairground/arcade game "whac-a-mole". The goal is to hit the moles as they poke out from eight different spots on the ground before they quickly duck their heads back down. Later stages switch the moles with other animals and characters to quickly bop.

The game was released with a rubber mallet and a special smaller Power Pad peripheral (known in Japan as the Family Trainer) with a grid of buttons that corresponded to the holes that the moles would emerge from. Because the Power Pad had twelve buttons, the different stages could be configured differently: for instance, the first level had a ring of eight buttons on the right side of the pad, whereas the next level included the left, right, and bottom row of buttons to form its eight around an island in a U shape. 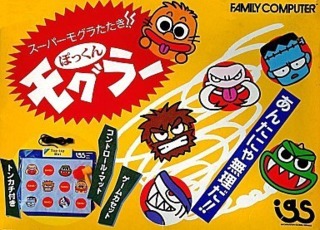