Jazz Jackrabbit is back in his second adventure, this time accompanied by his brother Spaz.

Jazz Jackrabbit 2 is a fast paced 2D action platformer developed by Epic MegaGames (now known as Epic Games). It has close resemblences to other platforming games that it took inspiration from: Super Mario Bros., Mega Man, and Sonic the Hedgehog.  In the game you take on the role of either Jazz Jackrabbit or his little brother Spaz to defeat the villainous Devan Shell. Jazz's sister Lori was also added as a playable character in  The Secret Files expansion. Jazz Jackrabbit 2 was originally released in July 31, 1998 for Windows based PCs and shortly after for Macintosh computers, becoming the first in series to run on the Macintosh.

The game is divided into four  separate episodes

After saving Eva Earlong, daughter to the Queen, in the first game, Jazz is given permission to marry her. However Devan Shell reappears and steals Eva's 24-karot ring. His plan is to use it to make a time  machine so that he can go back in time and kill all of the rabbits. As a result of Devan's return Queen Earlong throws Jazz in prison. Spaz breaks into the prison and frees his brother and together they break out of the  castle, by defeating the Queen at the exit. Jazz and Spaz escape through the  castle fields and head for Devan's  laboratory. There they  defeat Devan's evil robot but it was too late, and Devan has started his time machine. Jazz and Spaz are sucked into a wormhole and are sent back in time.

Jazz and Spaz found themselves in a familiar place. They end up in a location from their first adventure in Jazz Jackrabbit. They fight through Victorian streets and sewers and head for Tubelectric. From there they head to the castle that Devan was in in the first game but instead of him they find another robot. After defeating the robot they use a wormhole that opened from the machine to return to normal time.

This time they are in a jungle in the  modern Carrotus. They find Devan but he opens a door to Hell and jumps in and Jazz and Spaz follow. They enter Hell and find that it is freezing cold. As they get deeper in, it starts to get hotter. They track Devan down in the deepest parts of Hell and have one final battle. Half-way through the battle Devan turns into a dragon-type creature that can breath fire. Yet it didn't matter, Jazz and Spazz defeat him and  reacquire the 14-karat  diamond. They return and Jazz and Eva get married.

Jazz Jackrabbit 2 is a platformer that plays similarly to Sonic The Hedgehog. The game features spring pads, travelling by tubes and both characters jump in a ball shaped formation. There's also alot of action-oriented puzzles. However compared to Sonic, there's alot of emphasis on shooting and action and so the game is also similiar to Earthworm Jim. Jazz Jackrabbit 2 features a large variety of weapons, such as homing rockets, ice beams, flame throwers and TNT, most of wich can be upgraded for higher damage.

As mentioned, you can choose to either play as Jazz or Spaz and both have their pros and cons. Jazz can use his ears to hover in the air (much like Earthworm Jim) and do a jumping Uppercut while Spaz can double jump in mid air and karate kick. Both characters can do a Butt Stomp. The inspiration from Mario Bros. and Mega Man is also plainly evident.

The game features a large amount of multiplayer options and game modes. There's options to either play split-screen, on LAN or on the internet. The game can be played either cooperative or against eachother. Some of the modes featured are:

Often abbreviated as JCS, Jazz Creation Station is a level editor that features an extensive amount of customization for the players to create their own levels, both single- and multiplayer. While not featured in the official package, players can even create their own tilesets and music for the game. All of this is automatically shared once a player joins a server, without ever having to download it separately.

New levels are still being created by the fans today. 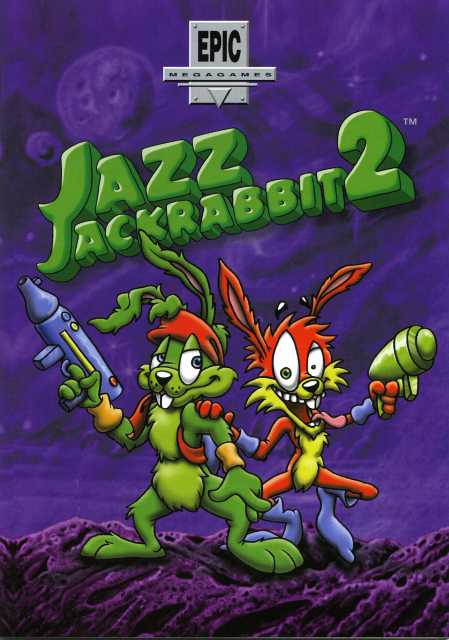