Set several years after Devil May Cry 4. which was released a decade prior, the series returns with three playable characters including the original and recurring protagonist, Dante and the protagonist of the fourth installment, Nero.

Devil May Cry 5 is the 5th main title of the Devil May Cry franchise. As with the preceding four titles, it is a hack and slash action game. It is the first Capcom developed DMC game since 2008.

Dante - Character model based on model Adam Cowie - Mocapped & voice acted by Reuben Langdon. Pre-release information describes Dante's quest in DMC5 as trying to get revenge for the murder of his mother as a child and the control Mundus had over his brother as "Nelo Angelo" in the first game. As with previous games Dante acquires new weapons as the game progresses, once again starting with the Rebellion sword.

Nero - Character model based on model Karlo Baker - Mocapped & voice acted by Johnny Yong Bosch. Following the events of his debut in DMC4, Nero is working independently as a demon hunter with the Devil May Cry branding. Nero fights with his Red Queen sword & Blue Rose revolver gun. His demonic Devil Bringer arm is replaced with multiple Devil Breaker robotic arms which he acquires throughout the game.

V - Character model based on model Owen Hamze - Mocapped & voice acted by Brian Hanford. The new 3rd playable protagonist who can summon demons based on enemies from the first Devil Cry May to fight for him. The three demons being Griffon, a bird which fights with long-range electric attacks, Shadow, a cat that fights by manipulating its body into spikes and V's devil trigger summon, Nightmare, a lumbering demon that matches a lot of DMC5's bosses in size.

Nico - New character Nico is the granddaughter of Nell Goldstein, the gunsmith who created Dante's guns Ebony & Ivory. Nico has dreams of being a legendary craftswoman & weapons maker like her grandmother & his formed a partnership with Nero, making & selling her Devil Breaker arms to him. She drives her van to Nero's locations during missions, functioning as a mobile base of operations.

The game's story is the furthest in the DMC timeline, chronologically following the 3rd, 1st, 2nd and 4th game.

Nero now runs as a separate branch of Devil May Cry, a demon-hunting business with Dante. One day, a mysterious enemy appears and literally rips off Nero's Devil Bringer arm from his body, taking the power of Yamato with it. One month later, demons invade Red Grave City, with a giant Qliphoth tree taking root there and draining the blood of most citizens nearby. Dante and the rest of Devil May Cry try to slay the demon at the top of the tree, Urizen, but they find his power too strong as Dante, Lady, and Trish all lie unconscious while the newcomer V drags Nero away from the scene.

One month after Dante's defeat, Nero, V, and Nero's friend Nico head back to Red Grave City to destroy the Qliphoth and Urizen, and rescue their friends if they are still alive. Nico uses her weaponsmith skills to design temporary bionic replacements for Nero's severed arm, known as Devil Breakers, that give Nero a fighting chance against these new demons.

With full development following 2015's Devil May Cry 4: Special Edition, DMC5 was announced at E3 2018 at Microsoft's Press Conference. It marks a return to the original Devil May Cry universe which last had a full instalment in 2008 with Devil May Cry 4. This game marks the return of Hideaki Itsuno as the director, who also led Devil May Cry 2, Devil May Cry 3 and 4 along with their upgraded versions. It is reported that many staff members from prior Itsuno-directed projects are returning.

The game has been confirmed to be running on the Capcom's RE Engine as the 2019 Resident Evil 2 remake and 2017's Resident Evil 7 rather than Capcom's MT Framework which was used for DMC4, Dragon's Dogma (also directed by Itsuno) and 2018's Monster Hunter: World. This came with a focus on photo-realism but the game aims to maintain the smooth 60 frames-per-second that the series is known for. 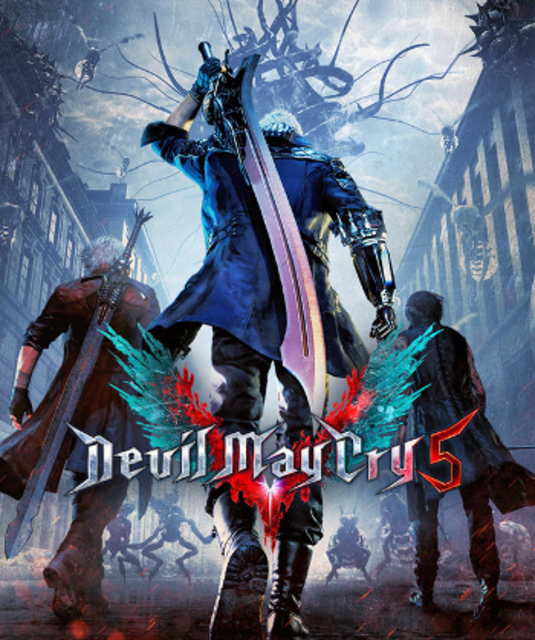